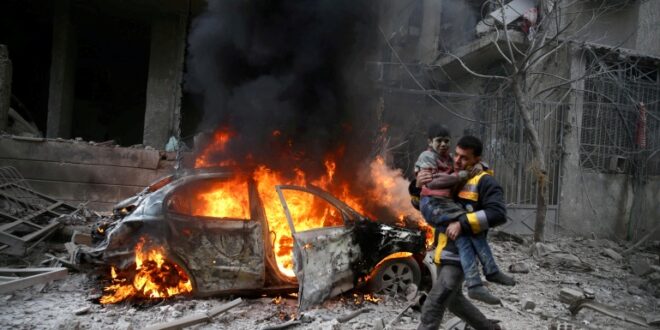 The U.N. human rights office said on Tuesday that 306,887 civilians had been killed in Syria during the conflict since March 2011, which amounts to about 1.5% of its pre-war population, in what is believed to be the highest estimate yet.

Syria’s conflict began as a result of peaceful protests against President Bashar al-Assad’s rule in March 2011 and morphed into a multi-sided, protracted conflict that eventually involved world powers such as Russia and the United States.

The frontlines of the conflict have mostly been stagnant for years, but violence has continued and the humanitarian crisis persists with millions still displaced within Syrian borders and millions more as refugees internationally.

The latest death toll, based on multiple information sources and covering the first 10 years of the conflict through March 2021, amounts to 83 deaths on average each day, 18 of which estimated to be children.

“The extent of civilian casualties in the last 10 years represents a staggering 1.5 per cent of the total population of the Syrian Arab Republic at the beginning of the conflict, raising serious concerns as to the failure of the parties to the conflict to respect international humanitarian law norms on the protection of civilians,” according to the report made by the U.N. Human Rights Council in Geneva.

However, the estimate is thought to represent “only a portion of all deaths”, according to the report, since it only includes deaths as a direct result of the conflict, and not indirect deaths related to a lack of food, water, or healthcare. The report also did not include non-civilian deaths.

The top cause of civilian deaths in the report was from “multiple weapons”, including clashes, massacres, and ambushes. The second cause of death was by heavy weapons.

The UN said last year that at least 350,209 people had been killed in the Civil War so far, a figure which includes non-civilian casualties.

Previous Cheetahs to be introduced back in India after 70 years
Next Why Is It Necessary To Go To The Doctors?