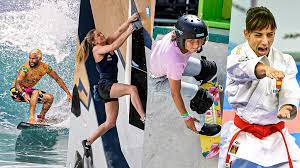 The 2021 Tokyo Olympics have now come and gone; two weeks of intense international competition across 33 different sports and 339 events, the largest number of events in Olympic history.

Amongst these are fan favorites including swimming, track and field, basketball, and gymnastics. However, this Olympics has also debuted four brand-new sports: karate, surfing, skateboarding, and sports climbing.

Karate, a one-on-one combat sport utilizing the bare hands and feet, joins boxing, fencing, judo, taekwondo, and wrestling as the sixth martial art to be added to the Olympics.

The events in Olympic karate are classified as either kumite or kata. Kumite, the Japanese word for “grappling hands”, has two athletes going head-to-head in a sparring match. The goal is to accumulate the most points before the round ends. Kata, on the other hand, is an exhibition of martial arts techniques which is then scored by a panel of judges.

Skateboarding has also made it to Tokyo 2021, and also consists of two types of competition. The first of which is park competition, where much like a classic skate park, displays many half-pipes and bowls, and emphasis is placed on getting significant airtime and completing complex flips and twists. In contrast, street competition provides an array of curbs, rails, and stairs, emphasizing grinding for extended periods of time. Both events are judged on a 0-100 point scale.

Perhaps the most variable and difficult of these new additions is surfing. Because the wind and tide conditions on each day will never be exactly the same, the competitors must learn to adapt to any weather they might potentially face.

While both longboard and shortboard surfing competitions are popular worldwide, shortboard has been the only competition included in the Olympics. Each athlete is scored by a panel of judges after surfing a maximum of 25 waves over the course of approximately thirty minutes.

Sport climbing, a form of rock climbing where climbers are supported by a rope, is the final addition to Tokyo 2021. There are three classes of events: speed climbing, lead climbing, and bouldering.

Speed climbing is exactly as it sounds — whomever reaches the peak of the climbing wall first wins. The lead climbing event requires climbers to scale a 15 meter wall with a 6 meter overhang; the winner is whichever athlete that can ascend the furthest in a set amount of time. Bouldering is an event that is judged by how many obstacles a climber can overcome in a timed environment.

While these four sports entered the ring in this year’s Olympics, unfortunately only surfing, skateboarding, and sports climbing will be seen again in Paris 2024. Notably, these three events have been seen as easily accessible to a wide range of casual olympics viewers, a major reason why they have been selected to remain in competition for the foreseeable future.