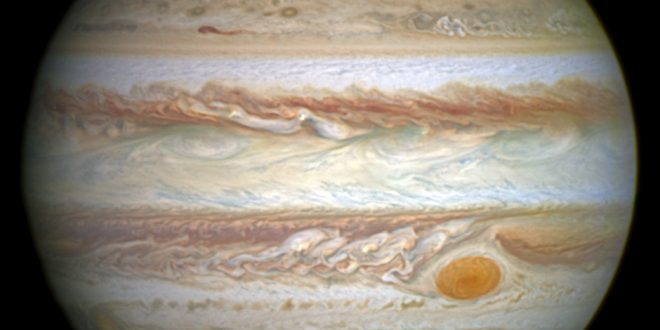 This full-disc image of Jupiter was taken on 21 April 2014 with Hubble's Wide Field Camera 3 (WFC3).

A New Judge of Jupiter

Recently, NASA has released papers detailing data received from the Juno spacecraft, a probe launched in August 2011 whose aim is to explore Jupiter and uncover more of the gas giant’s secrets. Every 53 days, it approaches Jupiter and flies by from the North to South pole collecting data. From the data collected by Juno, there have been multiple interesting revelations. Pictures taken of Jupiter’s poles reveal that the area is smothered in Earth sized storms, all of which are clustered together. The planet’s magnetic field, which was already estimated to be about 10 times stronger than Earth’s strongest magnetic field, is also realized to be larger than we originally thought and also more random and irregular. With these new discoveries, Juno has already given us some new and exciting data, but on its next fly-by on July 11, Juno will fly over Jupiter’s iconic Great Red Spot, where it will hopefully pierce the clouds of mystery over what exactly is going on at Jupiter.

Previous How Many Different Ways to Say Hello?
Next Nutrition Overview