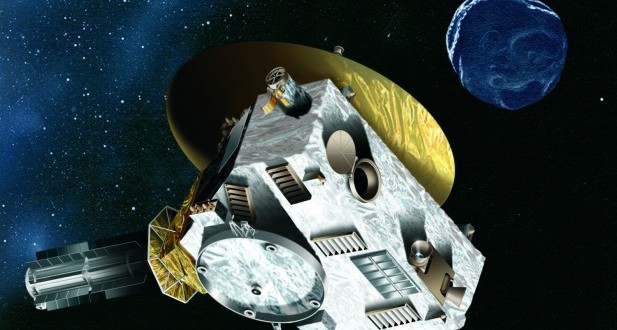 After nine years of travelling, on July 14, 2015, New Horizons finally flew by Pluto, taking clear pictures of the dwarf planet.

Standing 3.26 billion miles away from Earth, Pluto is the only major part of our solar system to have never been visited by a probe.

The New Horizons Probe will take all kinds of data from the dwarf planet, using gadgets installed on it. It can take pictures from afar, map the surface topographically, as well as identify the temperature, atmosphere, solar winds, and density of Pluto.

Alan Stern, the New Horizons principal investigator said, “It’s really historic what the US has done, and the New Horizons team is really proud to have been able to run that anchor leg and achieve such an accomplishment.”

The closest approach to the dwarf planet is 8,150 miles from the surface, where it will take the clearest photos of Pluto and study the core to find out more about it.

New Horizons is not only studying the planet, but will also study the five wobbly moons of Pluto: Charon, Hydra. Styx, Nix, and Kerberos. However, this is only for a short period of time, since the probe will hit the closest point to the moons when it is still approaching Pluto.

Some History about Pluto

Pluto was discovered in 1930 by American astronomer Clyde Tombaugh, who was using one of the most powerful telescopes at the time.

After the discovery, Pluto was considered a planet for a bit more than 70 years before being downgraded to a “Dwarf” planet in 2006 by the International Astronomical Union.

Pluto was named Pluto by an 11-year old schoolgirl in Oxford, England, naming it after the classical mythological Roman god of the underworld.

Is around 2,370 Kilometers in diameter.

Considered the largest object of the Kuiper Belt.