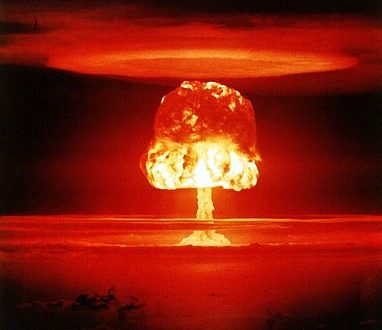 It is almost a deja vu. An East-Asian country provokes the United States, toying with the industrial power over territory and power in the region. A military buildup occurs, and the United States readies itself for an upcoming war that may begin with a surprise strike on a US territory in the vast pacific ocean, demonstrating their ability with new weapons and technologies. The similarities are uncanny.

The Kim regime has speedily developed around 15 weapons under its own technology, and although small compared to the superpowers’ ~7000 warheads or even its neighbor China’s 270 warheads, North Korea has been actively firing test missiles over South Korean and Japanese airspace, allies of the US, consequently raising international tensions.

Now, in response to “Rocket Man”, President Donald Trump has declared in his State of the Union Address that the US is going to resume nuclear testing. Now that “mutually assured destruction” is a possibility once again, what exactly does a nuclear blast do to the average human?

The signature mushroom cloud of a nuclear explosion may be the last things people see. Many wouldn’t even make it that far, as blinding light and thermal radiation scorches everything within a 10 miles radius. Flesh disappears into nothing, leaving only shadows on the pavement. The shockwave follows, flattening whatever is left after the firestorm. Last but not least, the radiation sets in. In a nuclear explosion, the first type of ionizing radiation you may encounter is known in the media as fallout. These beta burns are the rocks coins, whatever object that has not been melted by the fireball. They are usually highly radioactive but requires direct contact to do any noticable harm. Gamma radiation is what is responsible for the long term effects of a nuclear blast. Your tongue tastes like lead, and your skin would start turning red and blistering. The high radiation doses destroy parts of your DNA, causing mutations, and it is very common for one to develop cancer rapidly.

There are many effects of radiation poisoning, including Prodromal syndrome, bone marrow death, and the Central Nervous System death. While it is not known what exactly causes Prodromal syndrome, this mental illness symptom has been notably recorded in many cases of radiation exposure. Bone marrow death drastically decreases the amount of red and white blood cells produced in one’s body, and similar to Hemophilia or AIDS, a single cut and be deadly. Last but not least, the Central Nervous System, consisting of the brain and spinal cord, is greatly damaged; cases of coma, respiratory failure, seizures, and tremors are often synonymous with the condition.

Foods and Diets that Can Make You Smarter

How to Relieve Stress

By: Dominique Huang Stress. Everyone has felt it at one point or another; it seems …