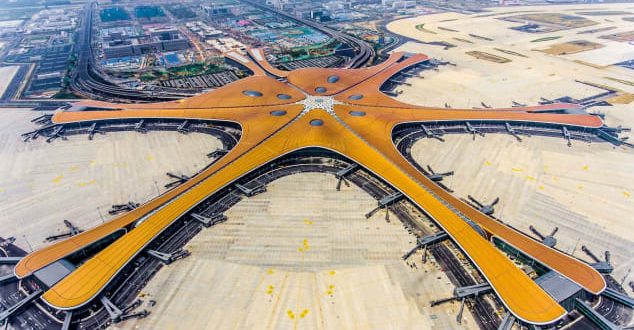 Beijing’s massive new Daxing International Airport is officially open for business. Flights from Daxing will cover 112 destinations around the globe by next spring.

Daxing’s official opening caps a long design and building process. Construction for the $11.5 billion project began in 2014, with more than 40,000 workers on site at its peak.Designed by the late architect Zaha Hadid and her Chinese partners, the airport is built for the future, boasting a terminal the size of 97 soccer pitches — as well as customer-service robots that provide travelers with flight updates and airport information.

Nicknamed “starfish” by Chinese media for its shape of five concourses connected to a main hall, Daxing aims to reduce walking for passengers, long a complaint about many new mega-hubs.

The airport authority has promised a distance of no more than 600 meters between security checkpoints and the remotest gates.

Security and measures were also on display. Travelers will be scanned on cameras using facial recognition. Counters will be fully automated to capture face photos and relay them each part of the journey through the airport, including security and the departure gate.

Previous My Dad
Next Homework – A Poem