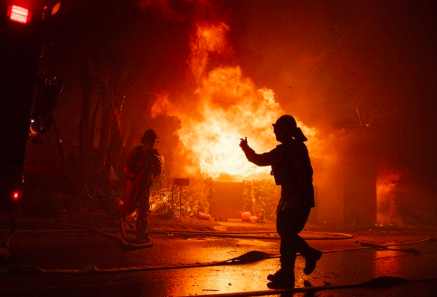 Northern and Southern California have suffered from severe fires over the last few
weeks. Firefighters are battling over 11 fires across the state. These fires have gotten
increasingly larger, and difficult to contain due to the strong winds coming from the coast of
California. Thousands of people have been ordered to evacuate by emergency officials, causing
severe traffic congestion and water and food shortages in grocery stores. As a precautionary
measure, PG&E has even shut off the power supply for 29 counties and 596,000 customers
statewide.
The National Weather Service, a federal agency that provides weather forecasts to states
in the U.S., has been covering the news forecast in Southern California and keeping the residents
on alert about weather outlook. The fires in Los Angeles have prompted the National Weather
Service to give a red flag warning, meaning that there are high winds, high temperatures, and
high chance of fire risk is on the line. Overnight, the fires in Southern California have spread and
high winds have knocked down trees and power lines. As a result, the National Weather Service
recently issued an extreme red flag warning to Southern California residents living for
Wednesday. These residents are in high danger of extreme fires and emergency officials have
spread the word of the need of evacuation. These extreme fire conditions are unprecedented in
Southern California, posing a significant risk to many California families. Emergency officials have worked around the clock providing real time social media updates and emergency relief in
evacuation centers.