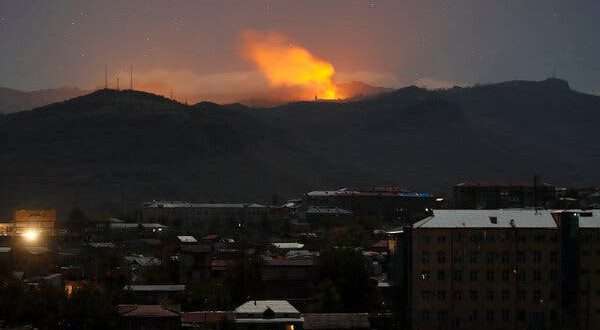 On Sunday, November 8th, the president of Azerbaijan claimed on Sunday that his forces had successfully captured a strategically important hilltop town in Nagorno-Karabakh, which if confirmed, would greatly hinder Armenia’s defense of the region and provide Azerbaijan with a significant strategic advantage.

The town, called Shusha by Azerbaijanis and Shushi to Armenians, sits at a commanding height that overlooks several mountainous valleys and Nagorno-Karabakh’s capital, Stepanakert, and it is considered a linchpin to military control of the region.

The town’s capture would also likely mean that Azerbaijan had captured a main road connecting Armenia to Nagorno-Karabakh, which is internationally recognized as belonging to Azerbaijan but is home to mostly Armenians.

According to Azerbaijani president Ilham Aliyev, “We have won this victory on the battlefield, not at the negotiating table… I have said many times that, despite all the statements, there are military solutions to this conflict”.

Officials in Armenia and Nagorno-Karabakh have denied the claim of the capture of the town by Azerbaijan, and have said that fierce fighting continued.

The town is part of the military territorial gains main by Armenia in the previous Nagorno-Karabakh conflict in the late 1980s that ended with a ceasefire but no settlement in 1994. The war drove nearly a million Azerbaijanis from their homes.

According to reports, since fighting began on Sept. 27 over control of the city, both sides have deliberately shelled civilian areas, and at least 1,000 people, many civilians, have been killed.

Fighting has continued despite repeated attempts by Russia, France, and the United States to help both sides negotiate an effective cease-fire. The conflict has already caused much international concern due to its potential to drag in regional powers such as Russia, Turkey, and Iran. Turkey has been openly backing Azerbaijan, with President Erdogan congratulating Azerbaijan for capturing the hilltop town on Sunday. Russia as a mutual defense pact with Armenia, though Moscow says it will only intervene if violence spreads to recognized Armenian territory. As the war rages on and gathers more victims, the risk of a full-scale war with larger regional countries involved increases.