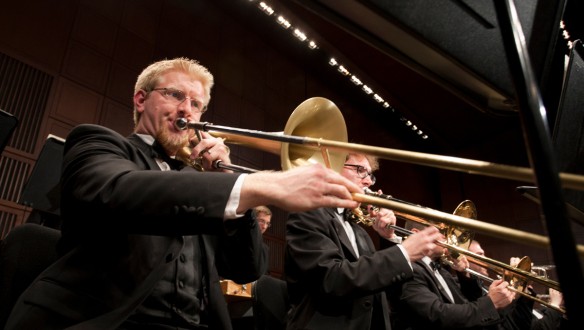 Matt Finders is a trombonist and former member of Jay Leno Band on Tonight Show. He performed in several big bands and major musical productions on Broadway. I decided to interview Mr. Finders as a successful musician to understand more about music career and get some advice for future musicians.

Question: Why did you decide to play trombone? What other instruments do you play?

Answer: My older brother played trombone through high school. I started playing trombone when he went to college, leaving his instrument behind. So the choice was made for me. During my career, I also played bass trombone and tuba. I’ve been learning acoustic bass more recently.

Question: What other bands have you performed in aside from the Jay Leno Band? How do you get started when transitioning to a professional status?

Answer: After graduating from Livermore High School, I attended San Jose State University, where I received my bachelor’s degree in music performance. During my third year at SJSU I won an audition to play with Clark Terry’s Big Bad Band. I then decided to move to New York and pursue a career in music. I spent ten years in New York working as a freelance musician. I got to play Broadway shows, such as Cats, Anything Goes, 42nd Street, Secret Garden, and many others. I also played with Benny Goodman, Toshiko Akiyoshi, Natalie Cole, Sting, and many more.  In 1992 I received a call from Branford Marsalis to play in Tonight Show with Jay Leno band. I spent 17 years on this job.

Answer: Mistakes will happen, but you can’t let them throw you off. I usually never got nervous, because I had put in years of practice and I was confident that I could play pretty much anything. To make it as a pro, you have to be confident of your abilities.

Question: What education/training is required or recommended?

Answer: The key for aspiring musicians is to have as many skills as possible. The modern freelance musician needs computer skills, composition skills, stylistic versatility, and knowledge of where the business is going in order to get in front of it. Technology has changed many aspects of the business, but it has also provided avenues that didn’t exist ten years ago. The key to the music industry is in figuring out where it is headed next. Connections I made in college, and early on in my career have been the ones that have helped me most in securing work. So it is a good idea for an aspiring musician to go to college where they want to end up working. Other areas in music, such as production, business, and education still seem like viable majors.

Answer: A good musician will always be able to find places to play, but making a living at it gets a bit tougher all the time.
While musical variety is stimulating and inspiring, the constant travel and long hours away from home make it not the best scenario for raising a family.
With the advent of midi sounds and digital recording techniques, every aspect of live performance has shrunk in the last thirty five years.