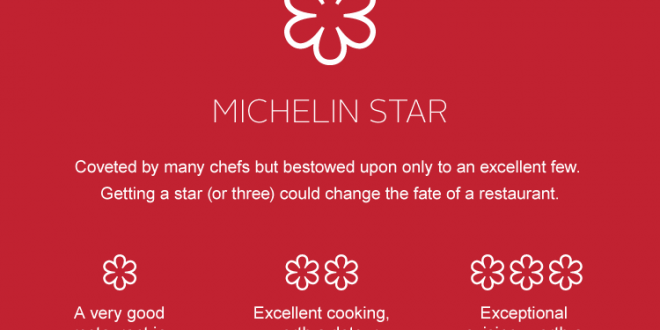 A Michelin Star is a prestigious award that gives a restaurant prestige, class, and expectancy. While all restaurants strive to achieve one of these stars, few accomplish this feat, and even fewer take home multiple stars. The Michelin stars are awarded to restaurants and hotels in the annually published series of Michelin Red Guides, commonly known as simply the Michelin Guides, that contains reviews of typically several thousands restaurants and hotels in a particular region of the world. The system started out in 1900 as a travel guide of France published by the renown French tire company, Michelin, and sold to motorists to spur car sales and therefore tire sales. Over time they expanded their guides to many countries and cities in Europe, Africa, Asia,and the Americas.

In the Michelin Guides, many good restaurants are reviewed, however relatively few earned the Michelin stars distinction, therefore the Michelin stars have often been compared to the annual Academy Awards for films. Those who receive stars are rated from one to three stars: one denoting a “very good restaurant in its category,” two signifying “excellent cooking, worth a detour,” and three giving a restaurant the highest honor of “exceptional cuisine, worth a special journey.” To ensure impartiality and integrity of its rating system, Michelin instructed their inspectors to maintain complete anonymity. They are not allowed to talk to anyone about their work, even guarding the secret from their own parents. The Michelin star is so important to the culinary community to the point that every time the annual edition of the guides are published, there is a massive reception and event. The media rushes to see who gained or lost a Michelin star.  This media frenzy surrounding the annual publication of the Michelin Guides means that gaining or losing of a star can significantly affect the business of a restaurant. The event also reveals the Rising Star awards, which indicate which restaurants have the potential for earning a star or gaining more star. So, the next time you go out, perhaps pick up one of these guides and visit a Michelin star restaurant to experience for yourself why they these stars are so sought after.