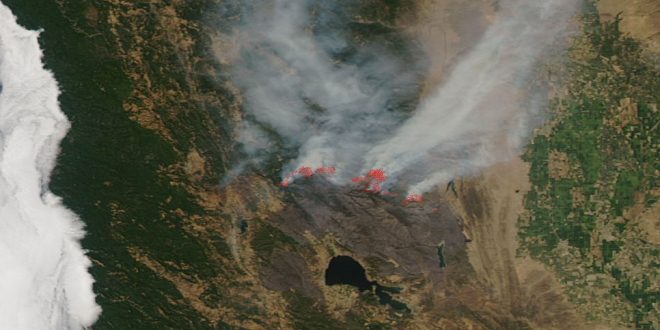 The wildfires of Northern California that began in July are continuing to expand. The fires have burned thousands of acres of forests and residential areas, displacing their residents.

The Mendocino Complex Fire has now grown into the biggest fire in California’s history.
NASA, through satellite technology, estimates the Mendocino fire burned down 1,200 square kilometers of land, equivalent the size of New York City.

Due to the high temperature and dry air, the Mendocino Complex fire may continues to expand. Firefighters are currently working to confine the fire in Mendocino National Park to prevent further damage.

The Mendocino Complex Fire consists two major fires; the Ranch fire and the River fire. The Ranch fire located northeast of Clear Lake, and is challenging to control due to its rugged terrain. This fire continues to spread, burning more than 270,000 acres. Officials report that only 67% of the fire is under control.

The frequent fires on the west coast has drawn attention to the cause of these wildfires. Alison Bridger, a professor of climate science at San Jose State university, said that there have been two major causes of wildfires in California in recent years: the earth’s natural climate cycle and global warming. In fact, the wildfires in California have become more and more serious in recent years, which may indicate that global warming has increased wildfire risk.

Previous The Recipe for Sarcasm
Next To Remember