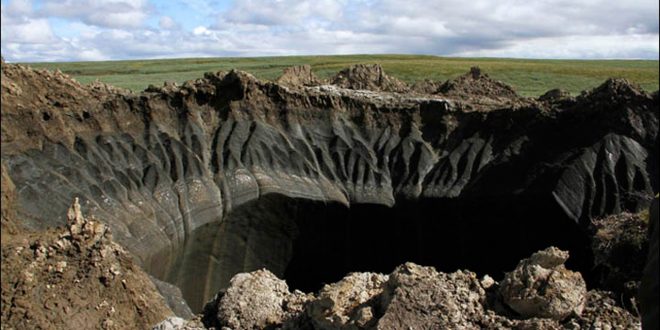 Warmer temperatures, unpredictable weather changes, and more frequent occurrences of natural disasters are a few of the effects of climate change that have become more prevalent in recent years. Recently, climate change has also been pegged as an explanation for mysterious, crater-like holes. In 2014, massive holes began appearing in parts of Siberia, with one crater in the Yamal Peninsula spanned more than 100 feet wide. When dozens more of these mystery holes were spotted nearby, scientists theorized that the mystery hole wasn’t an impact from a meteorite but rather a phenomenon caused by climate change.

Scientists believe that the crater-like holes have been formed by underground methane explosions or by the freezing and melting of the landscape. In August 2020, Evgeny Chuvilin, a lead research scientist at the Skolkovo Institute of Science and Technology’s Center for Hydrocarbon Recovery, investigated the interior of these craters to investigate how they formed and where the gas that caused them to form is located. Navigating these craters are often challenging because significant preparation is required of these operations, and there is a limited interval for exploration because the craters turn into lakes a few years after forming. Nonetheless, Chuvilin and his team found a key piece of evidence that supported the theory of methane bombs causing these craters: high levels of methane, 9.6 percent compared to the normal 0.000179 percent. They believe that methane and water have been frozen underground, but as permafrost melts due to rising temperatures, the built-up methane mass is released in a bomb-like fashion, leaving a crater behind.

While very few people have witnessed any of these explosions, they pose a risk to the people who live in these remote regions and oil and gas infrastructure. Furthermore, scientists are worried about the fact that methane is a key contributor to climate change. There is a potential for a dangerous cycle of warming temperatures that cause more “methane bombs,” which in turn contribute to further global warming.