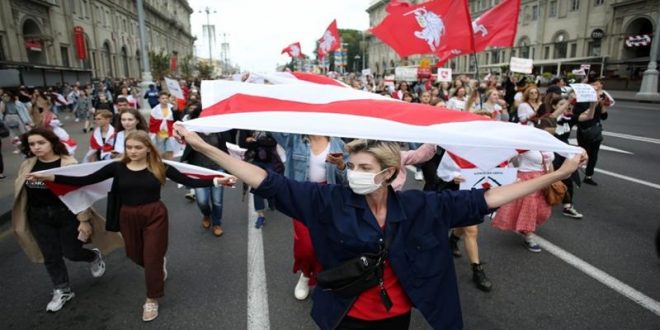 Large protests have spread across Belarus after the holding of an allegedly rigged election in August.

Protests began after allegations by opposition leader and presidential candidate Svetlana Tikhanovskaya and her political party that the election was rigged. The election in Belarus resulted in a landslide victory for President Alexander Lukashenko, who has been in power since 1994. On Friday, the Central Election Commission declared Mr. Lukashenko the winner, with 80.1% of the vote, while Ms. Tikhanovskaya had only 10.1% of the vote.

Supporters of the opposition candidate continue to insist that Ms. Tikhanovskaya was the victor in the election, claiming that it was rigged. In her first statement for days, the main opposition candidate said that instead of only getting 10% of the votes, she would have had around 60 to 70 percent of public support, if the Central Election Commission had counted votes properly.

Ms. Tikhanovskaya was detained by Belarusian authorities for a short period of time before being exiled and seeking asylum in neighboring Lithuania. She called on local leaders in Belarus to organize “peaceful mass gatherings”, saying: “Belarusians will never want to live with the previous government again. The majority do not believe in his victory.”

Many protesters that were arrested have also described being sent to detainment camps, where detainees were allegedly being beaten and tortured. Many released prisoners had bruising and swelling on their bodies, for which they claimed the police were responsible for. Amnesty International also said that detainees claimed being stripped naked, beaten, and threatened with rape. According to a Belarusian senate spokesperson, President Lukashenko had ordered an investigation into the mass detention of protesters, though denied the allegations that the protesters were being harassed and abused.

Spokespeople for the United States, European Union, Poland, the Czech Republic, etc. have criticized Belarus for its failure to hold a fair and democratic election, and the European Union has thoroughly considered imposing sanctions on Belarus.