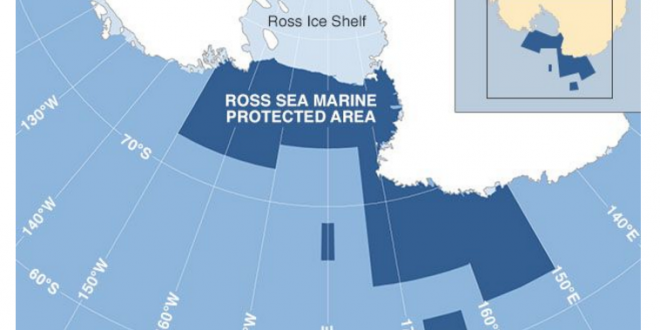 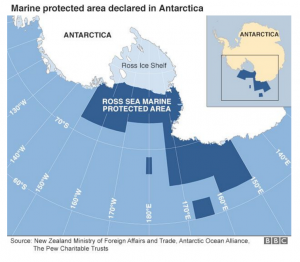 After many years of negotiating, 24 countries and the European Union reached an agreement last Friday to establish the world’s largest marine protected area in Antarctica’s Ross Sea. The Ross Sea is sometimes called the “Last Ocean” because it is largely untouched by humans. It is widely considered to be the last great wilderness area on Earth and is known as the polar “Garden of Eden”.

The sea’s nutrient-rich waters are the most productive waters in the Antarctic, leading to huge plankton and krill blooms that support vast numbers of fish, seals, penguins, and whales. Some 16,000 species are thought to call the Ross Sea home, many of them uniquely adapted to the cold environment. The area is home to killer whales known as the Ross Sea Orca, Adélie penguins, leopard seals, Minke whales, and Emperor penguins. It’s a rare place where humans are only visitors and large animals rule.

U.S. Secretary of State, John Kerry, had been working toward the protection of the Ross Sea for years, including the years he served in the Senate. China and Russia had been holding off due to concerns about putting too much ocean off limits to fishing or other uses, including the possibility of seabed mining.

The nations finally reached an unanimous deal at an international meeting of the Commission for the Conservation of Antarctic Marine Living Resources (the international body that oversees the waters around Antarctica). The sanctuary covers an area of 598,000 square miles, roughly twice the size of Texas.

The agreement, introduced by New Zealand and the U.S., will be enforced in December. 72% of the sanctuary will see a general protection “no-take” zone where nothing can be removed, including marine life and minerals. As part of the compromise that emerged in negotiations, there will be section zones where fishing for krill and toothfish for example, will be allowed for research purposes.

This will allow scientists to compare the impact of areas closed to fishing with other areas where fishing is allowed. Scientists can research the relative impacts of fishing and other changes, which will help our understanding of the range of variables affecting the overall health of marine ecosystems.

Cindy is senior at Henry M. Gunn High School and is incredibly honored to be a part of the Rising Star Magazine team. She enjoys belting out Disney songs, playing piano, watching Chinese dramas, and babysitting. Cindy serves as California DECA's VP of Silicon Valley and is also the singing teacher at FCSN and the President of HEARTS Nonprofit. She can be contacted at cindy@risingstarmagazine.com
Previous Drug Wars
Next The Agricultural Revolution