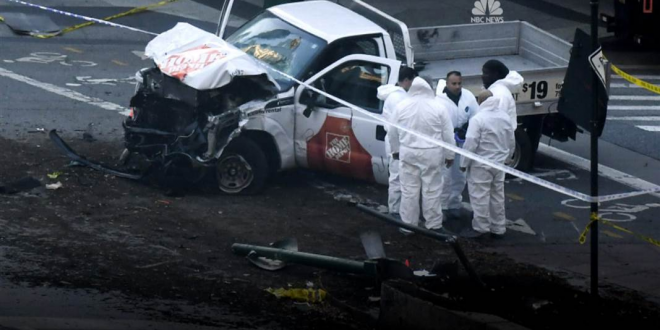 Halloween is the time for spooks and terror, but is a truck accident the kind of horror people are expecting?

During a sunny afternoon in Lower Manhattan, a white pickup truck driven by a 29-year old man drove down 20 blocks, crashing into pedestrians and cyclists along the way. Bodies and corpses were found everywhere around the scene, traumatizing and frightening many.

The white truck started on West Street at 3:05 p.m. and drove south, where it stopped after hitting a school bus on Chambers Street. During its path however, it rode through the bicycle lane, thus causing nearby bikers and joggers to be injured and killed as the the truck hit. At the end of its journey, the truck was also able to injure two adults and two children who were still on the bus during the final crash.

Many witnesses at the scene were able to describe the man causing the incident. One noticed that the man was carrying two handguns, which were later identified as a pellet gun and a paint gun. Other reports have suggested that the man yelled the words “Allahu akbar”, Arabic for “God is great”, while outside of the vehicle. Crowds of people ran for cover as the man went down the street, “screaming something indiscernible, and shooting at the cars, causing further mayhem.”

The chaos was finally stopped after he was shot in the abdomen by a police officer, but the event still leaves many witnesses horror-struck.

Roger is a junior at Carlmont High School in Belmont, California. Roger serves as an officer of Help Everyone and Remember to Share (HEARTS) non-profit. Roger founded the first California Business Professionals Association (BPA) club at his high school and is active in other STEM related clubs. Outside of his busy school schedule, Roger practices karate, plays saxophone, reads, and volunteers for several worthy social causes in the US and China. Roger is extremely honored to serve as the News Column editor for the Rising Star Magazine.
Previous America and Russia’s Joint Space Station
Next Hobby Supplies: Unknown Dangers