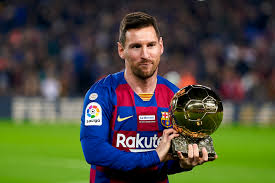 A leaked copy of what is reportedly the contract Messi signed in November 2017 was published by Spanish newspaper El Mundo on Sunday.

If the details are correct, it is the most expensive contract ever paid to a soccer player.

It shows the 33-year-old, considered by many to be the greatest soccer player in history, earns up to $168.5 million a season. Under Spanish law, he would reportedly have to pay around half that amount in taxes.

The contract expires on June 30, when the Argentine forward could leave the club he joined aged 13 on a free transfer. Messi rocked the soccer world when he handed in a transfer request in August and it remains unclear whether he will sign a new deal with Barcelona.

“FC Barcelona categorically denies any responsibility for the publication of this document, and will take appropriate legal action against the newspaper El Mundo, for any damage that may be caused as a result of this publication.

“FC Barcelona expresses its absolute support for Lionel Messi, especially in the face of any attempt to discredit his image, and to damage his relationship with the entity where he has worked to become the best player in the world and in football history.”

Messi, who is Barcelona’s record goalscorer, had asked to leave the club after falling out with former club president Josep Maria Bartomeu. In an interview in September, Messi said he “wanted to leave” and described the club’s management under Bartomeu as a “disaster”.

In the interview, with Goal, Messi said Bartomeu had reneged on a promise to allow him to leave on a free transfer at the end of 2019/20.

“I thought and was sure that I was free to leave, the president always said that at the end of the season I could decide if I stayed or not,” he said.

Despite him being a sports icon and one of the greatest athletes in sports history, does he deserve this contract?