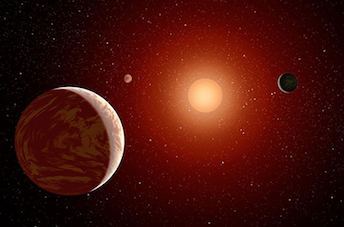 In February, NASA announced the discovery of seven planets similar to earth, around an ultracool dwarf star. The system of planets, named TRAPIST-1, is interesting because three of the planets are in the hospitable zone. That means that the surface temperatures can support liquid water and life. But some new discoveries may prove that it would be impossible for support life on such planets.

It was discovered that solar flares from the host stars cause chaos on the atmosphere. Over a period of 80 days, researchers noted 42 solar flare events, which means that the planets’ atmospheres would be too unstable for life as we know it to exist. The storms in the system are also 100 to 100,000 times stronger than the most powerful storms on Earth. This means that unless alien life on TRAPPIST-1 are especially hardy, there’s no way that life can exist on the system. Additionally, since these storms are more intense than anything we have experienced, we are also likely unable to colonize life on these plants.

Previous Growth Mindset
Next The Therapeutic Value of Apples