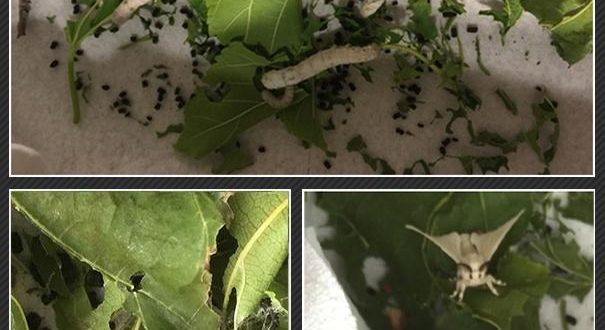 Which product is the ancient China best known for inventing? As you probably already know, it is silk. The use of silk varies from clothing and scarves to comforters and even parachutes. But do you know how much silkworms suffer during the process of silk production? 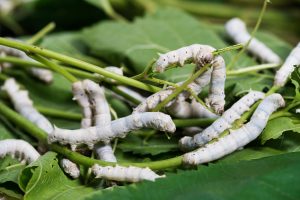 Typically, a silkworm spends pretty much three-quarters of its life eating only mulberry leaves and growing. When it is ready to change into a moth, it spins a cocoon made of a single strand of hardened saliva around itself. After a couple of days, a fully grown silkmoth emerges by secreting a substance that pokes a hole through the cocoon and crawling out, ready to find a mate and reproduce. However, this substance stains the silk while cutting the single-stranded cocoon into many shorter strands. To collect the silk unharmed, silk farmers swiftly cut off the last phase of a silkworm’s life by gathering the cocoons (pupas) and boiling them in water. This kills the metamorphosing silkworms inside and softens the silk, so the farmers can unravel the silk to spin into the sleek smooth thread we use today.

According to PETA, over 3000 silkworms are killed in order to make one pound of silk. Many people now consider and support the use of Ahimsa silk, or Peace silk. Because the process of collecting peace silk uses broken cocoons and rejoins the silk strands, it allows the silkworm to finish its life cycle. Peace silk products are very fluffy and comfortable, but typically lack the fineness of traditional silk, due to the small bumps where the silk strands are rejoined.

Silkworms have also suffered in the couple millennia under human care. Through the thousands of years of domestication in silkworm farms, silkworms have lost many of the abilities they once had. Modern silkworms rely solely on humans, and can’t survive by themselves, even in a grove of mulberry trees. In addition to being blind, silkworms’ motions and endurance is limited, and the moths can’t fly or eat.

One day in this winter, I got a very good opportunity to understand the silkworm’s life cycle when my mom asked me if I wanted to raise silkworms. I’ve raised quite a couple creepy crawlies in my life, including crickets and worms. My mom has a friend who raises silkworms, and I was intrigued by these little creatures, as I am a lover of all animals (except for spiders). I decided to embrace my Chinese background and raise some silkworms myself.

The eggs were tiny black specks, each about the size of the roller ball in a ball point pen. Since it was still cold and there were no mulberry leaves, the silkworm’s main food, I kept the eggs in the refrigerator.

In the spring, tiny mulberry leaves started sprouting from the trees, so I knew it was a good time to take the eggs out and let them hatch. About 10 days later, a tiny silkworm came out. It was the size of a small eraser shaving. I brought a tiny clipping of leaf to feed it. The number of tiny silkworms grew as they hatched out. After two weeks, all of them hatched out.

In a month, the silkworms ate and grew until they were around five centimeters long (about 40 times bigger than their original size!). Within this period, they molted five times. After its fifth shedding, one silkworm started to spin silk, wrapping it around itself, forming its cocoon to grow in for the next couple of weeks. When the second silkworm started to spin its silk, I realized I had two kinds of silkworms: pure white and brassy golden! Two more silkworms successfully became pupas, another white and another golden. After three weeks of waiting, my first silk moth came out, leaving a hole in one end of its cocoon. The rest soon followed.

To find a mate, the female emitted pheromones which attracted the males by its smell. Then the males competed by flapping their wings rapidly and loudly (even though they can’t fly) to get the female. To mate, the winning male joined abdomens with the female to fertilize the eggs. Sadly, we found that the losing mate died in the few days after losing. The female then laid the couple hundred fertilized eggs onto the paper towel for the next ten hours. After that, there was nothing else to do but to wait for the new cycle.

Through these two months of raising silkworms myself, I learned a lot about the life cycle and behavior of insects. In addition, I read many articles about silkworms in order to raise them. This experience for me was incredibly valuable, and I gained responsibility and knowledge.