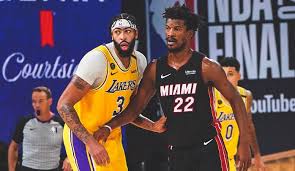 The Los Angeles Lakers and Miami Heat battled it out On September 30th in the first game of the NBA finals. Los Angeles Lakers being the obvious West Conference finalists, and the Miami Heat surprisingly taking the east, the game did not go so well for Miami. Lebron, the 35 year old veteran with 3 championship wins on his belt alongside Antonio Davis and Alex Caruso crushed Butler and Tyler Herro, the youngest player to make it to the NBA finals.

In eight of the previous nine trips that Lebron took to the finals, his team lost the series opener. But today, it could not have gone any better for them––after a tense game, they won with a final score of 116-98. Furthermore, Anthony Davis crushed it with a 34 point game in his first finals appearance of his career, and Lebron added 25 points, 13 rebounds, and 9 assists. The Heat however, could not make anything of their early 13 point lead after watching two of their best players leave the game with injuries. Goran Dragic, the team’s center, was presumed to have to sit out for the finals after sustaining an injury in his left foot, but it is yet to be determined.

Not only was the game interesting, but so were the view counts. Game 1 brought in only 7.41 million viewers to ABC. Significantly, that is reportedly the lowest viewership seen for the finals since 1994. This number was down 45 percent from last year’s Game 1 finals. But, many people are wondering why the approval ratings are down. This undoubtedly comes from the league’s protests against racial injustice. But, there are other reasons such as the cut in young viewership because of the 4 month period wait due to COVID 19. This could also be attributed to the fact that the NFL just started their season, meaning the momentum hasn’t built up yet.

Though the clear winner will most likely be the Lakers, it will be interesting to see what the Heat has in store for their opponents.

Previous Getting Better at Drawing
Next Kyrgyzstan Protests