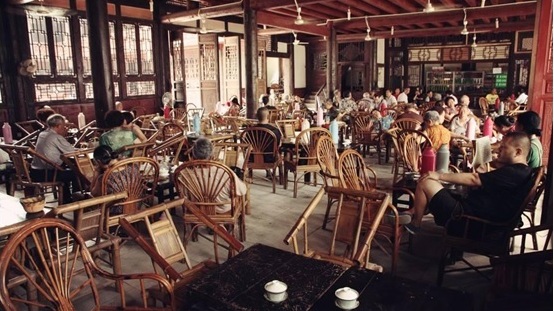 Chengdu is known as China’s happiest city because of its residents, who are reputedly the happiest in the country. It is believed that the secret lies in their leisurely and slow-paced lifestyle. It goes without saying that their unique ways of entertainment enrich their happy lives.

Drinking tea has become the most popular form of socializing in Chengdu. Teahouses can be found in every corner of Chengdu downtown as well as its suburbs. Going to the teahouse is one popular way to kill time: when the weather is pleasant, people go out to have a cup of tea in the open air with friends. Furthermore, there are many who believe that drinking tea can effectively prevent diseases caused by wet and hot weather. As the people of Chengdu love to chat with friends or do business over tea, teahouses are major social hubs. To heighten their appeal, most teahouses not only food and snacks to their clients but also offer traditional performances such as storytelling, local opera, or live music. As a result, many visitors join the locals and spend hours in teahouses enjoying the distinctive performances.

In Chengdu, people also enjoy playing Mahjong. It is a game of skill, strategy, and luck. Mahjong also requires four people playing, which encourages social interaction among the players. Each person sits on one side of a square mahjong table, and the game is played with a set of 144 tiles based on Chinese characters and symbols. Chinese mahjong is said to have originated 3000-4000 year ago, when it was prevalent among the nobles. Nowadays men and women of all ages from the north to the south enjoy playing mahjong, such that the pastime has undoubtedly become an eye-catching diamond in Chinese culture.

If you have a chance to go to Chengdu, do not limit yourself to the local restaurants to enjoy the delicious local dishes, but be sure to also immerse yourself in the laid-back lifestyle to experience the unique charm of this city.

Share
Previous Killer Heat– Literally
Next Speaking Up for School