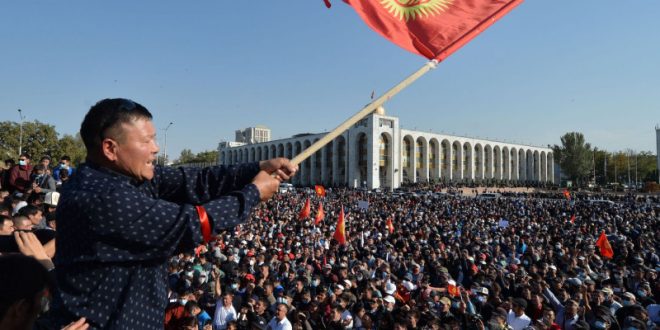 The Prime Minister of Kyrgyzstan has just resigned, following post-election protests against an allegedly rigged election. Prime Minister Kubatbek Boronov has reportedly been replaced by Sadyr Japarov, who was freed from prison by protesters. The election results have been annulled. Opposition groups had earlier seized control of parliament, saying Sunday’s ballot had been rigged. Russia and China have voiced concern about the crisis.

A large crowd gathered in the capital Bishkek on Wednesday to demand the impeachment of the country’s President, Sooronbai Jeenbekov, who hinted earlier that he was ready to stand down.

The pro-Russian president told news stations on Tuesday he was “ready to give the responsibility to strong leaders” but did not disclose who he had in mind. The election results had seen parties allied to President Jeenbekov win the largest share of the votes, and many have accused his party of vote-buying or rigging the election. Two presidents have already been overthrown in Kyrgyzstan in the past 15 years.

According to Jeenbekov: “The main goal of the protesters was not to annul the election results but to remove me from power,”. He also urged all parties to work on a “legitimate field” and work together to avoid the mass civil unrest and political upheavals of the past.

“To solve this issue, I am ready to give the responsibility to strong leaders, no matter which group they belong to. I am even ready to help them,” he stated. In an earlier video address to the public, the president had accused “certain political forces” of using the results of the election as an excuse to “violate public order”.

However, many analysts and observers say it appears that Jeenbekov has lost almost all of his influence on the public.

Opposition leaders have set up a Co-ordination Council but they are reportedly disputed on who will assume which position.

The Kremlin has said it is “certainly concerned” about the situation while China’s foreign ministry said it was “highly concerned”. On Wednesday, Russian President Vladimir Putin said he hoped for a peaceful solution to the crisis and that “normal democratic processes will resume… as soon as possible”. Kyrgyzstan heavily relies on both China and Russia economically there is a Russian military base in Kyrgyzstan.

Previous Lakers vs. Heat Game 1
Next How to Trick-or-Treat during the Pandemic