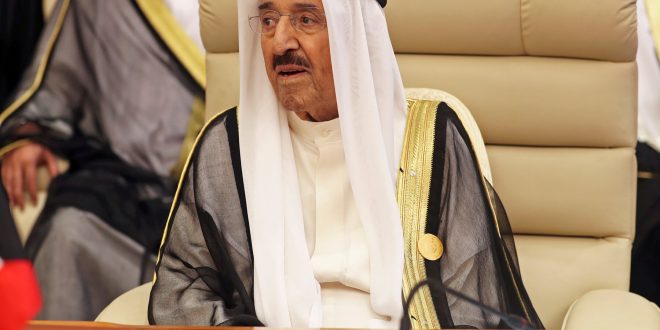 Kuwait’s ruler, Sheikh Sabah al-Ahmed al-Sabah, has died at the age of 91, state media reports. His 83-year-old half-brother, Crown Prince Sheikh Nawaf al-Ahmed, has been named successor by the cabinet.

In July, Sheikh Sabah was flown to the United States following surgical operations for an undisclosed condition in Kuwait that month.

Sabah had ruled Kuwait since 2006, and had overseen the foreign policy operations of the state for over 50 years. He was dubbed the “dean of Arab diplomacy” for his efforts during the 1990-1991 Gulf War to restore friendly relations between Kuwait and the Middle-Eastern countries that supported Iraq. The emir also regularly acted as a mediator for regional disputes, most notably the ongoing diplomatic stand-off between Saudi Arabia and Qatar. Kuwait also similarly refrained from intervening in the Syrian civil-war, instead hosting several donor conferences for humanitarian aid.

“Today we lost a big brother and a wise and loving leader… who spared no effort for Arab unity,” Jordan’s King Abdullah II said on Twitter. UN Secretary General António Guterres also praised the emir for being “an extraordinary symbol of wisdom and generosity” and a “messenger of peace”.

Being such a small Middle-Eastern country, Kuwait is both oil-rich and vulnerable. It has been an ally to the West for many years, and dependent on its protection. In 1961 and most-notably 1990-1991, the British, Americans, and French sent troops to Kuwait to defend it from Iraq.

Sheikh Sabah’s death was announced on state television on Tuesday afternoon by the Kuwaiti Minister of Court Affairs, Sheikh Ali Jarrah al-Sabah. However, the emir’s medical details and cause of death are yet to be released for the public.

Previous To Lift Heavy or to Lift Light, that is the Question
Next Mass Photometry