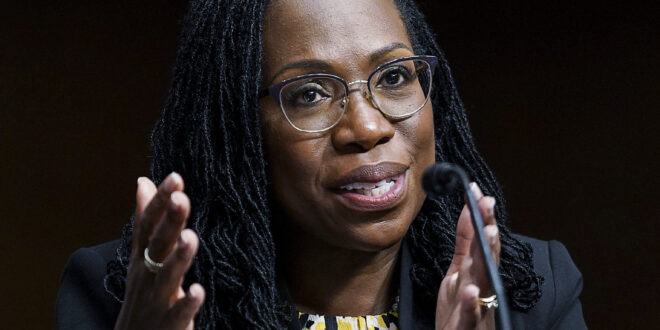 FILE - In this April 28, 2021 file photo, Ketanji Brown Jackson, nominated to be a U.S. Circuit Judge for the District of Columbia Circuit, testifies before a Senate Judiciary Committee hearing on pending judicial nominations, on Capitol Hill in Washington. The Senate is expected to narrowly confirm Ketanji Brown Jackson for the powerful U.S. Court of Appeals for the District of Columbia. She is widely expected to land on President Joe Biden's short list should a Supreme Court vacancy arise. (Kevin Lamarque/Pool via AP)

On Thursday, Ketanji Brown Jackson was confirmed by the U.S. Senate, and became the first Black female justice in American history.

Jackson was confirmed to the Supreme Court by a Senate vote of 53-47 with bipartisan support. Mitt Romney of Utah, Lisa Murkowski of Alaska, and Susan Collins of Maine were the three Republican Senators to join the Senate’s 50 sitting Democrats in support of her confirmation. Jackson is expected to assume her position in October, when Justice Stephen Breyer is set to retire.

Senator Dick Durbin, a Democrat from Illinois, commented on the successful confirmation, saying, “Judge Jackson’s confirmation will be a glass shattering achievement for America”.

However, Jackson’s unprecedented confirmation will not politics of the Supreme Court bench, which currently has a 6-3 conservative majority – the smallest liberal minority in over 20 years. Former colleagues of Jackson believe that she will seek to be in the majority with her colleagues on the Supreme Court whenever possible, and that she is expected to seek out compromise and consensus.

Jackson’s bipartisan confirmation is a win for President Biden, after a very divisive confirmation process. Jackson is the first Democratic appointee to the Supreme Court bench in 13 years, and she brings significant experience the bench currently is lacking, including in the fields of criminal justice and sentencing disparities.

Jackson has most recently been a judge on the D.C. Circuit Court, and will be the first former public defender to sit on the Supreme Court.

The Supreme Court could play a very significant role in possible changes occurring in American life, with key cases and rulings on heated issues such as abortion rights, gun rights, religious rights expected to play out in the future. The Supreme Court will also need to face the issue of increasing polarization of its justices.

Previous Must Needs for Vocalists
Next Deep Space Atomic Clock