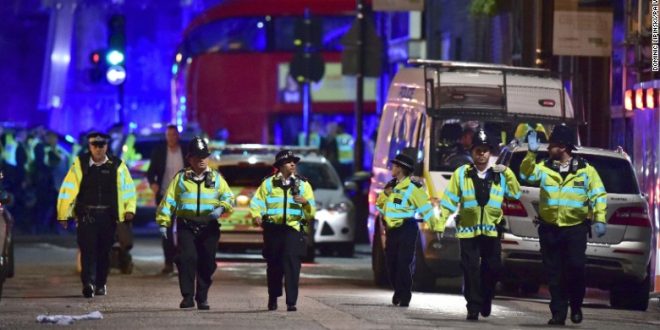 On June 3, 2017, right before 10 p.m., a rented white van plowed across the London Bridge heading towards the Borough Market, filled with stores and restaurants. The van was driving at speeds of more than twice the speed limit, zig zagging into the pedestrians crowding the sidewalk. After hitting and knocking down many bystanders, the van continued its journey until it crashed into the southern end of the London bridge. Three men got out of the van wearing what seemed to be explosive vests and brandishing large knives, going through restaurants and markets, slashing and stabbing at anyone in reach. Some eyewitnesses heard the men shouting “This is for Allah!” when they went about their killing. There was a total of 8 deaths and 48 injuries in the attack before the police shot the three perpetrators.

After all three men were shot, police officers searched the van and found bottles filled with explosive liquids and other gasoline bombs, as well as bags of gravels to cover up their plans in case people asked along the way. The three men’s identities were Khuram Butt, age 27 and the ringleader of the trio, Rachid Redouane, age 30, and Youssef Zaghba, age 22. Butt had already been investigated by MI5, United Kingdom’s intelligence and security agency, in 2015 but wasn’t found to be plotting any terrorists attacks. Research shown that he was an extremist and tried to indoctrinate many people about Islam and its teachings, even his own children. The MI5 later assessed that 500 people linked to the three men went on to commit terrorist acts. Because of this, police are starting to arrest and investigate people to see if anyone assisted or had knowledge of the terrorist attack beforehand. Commander of counter-terrorism Dean Haydon said there was no evidence that the three dead terrorists were the only ones tied to the actual attack. Haydon is also making sure that others don’t get inspired by this attack and asking companies to report suspicious behavior such as renting a truck for no reason. The Muslim holy month of Ramadan is a possible triggers for attacks like these, so an increase of security is necessary on the sacred days. In response to the United Kingdom’s critical terrorist threat, new security are being carried out for all events to make sure a repeat of this event never happens again.

Roger is a junior at Carlmont High School in Belmont, California. Roger serves as an officer of Help Everyone and Remember to Share (HEARTS) non-profit. Roger founded the first California Business Professionals Association (BPA) club at his high school and is active in other STEM related clubs. Outside of his busy school schedule, Roger practices karate, plays saxophone, reads, and volunteers for several worthy social causes in the US and China. Roger is extremely honored to serve as the News Column editor for the Rising Star Magazine.
Previous The Four Learning Types
Next Every Action Has a Reaction: Trump Administration on Recent Syrian Chemical Attack