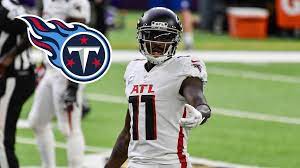 There have been many trade speculations flying around the NFL media during this off-season, but none have been as big as Julio Jones. This player is a football icon, the epitome of a great receiver, and the Seven time Pro Bowl, 2 time All Pro who led the league in receiving yards in 2018 and 2019 was just traded to the Tennessee Titans. We first heard a confirmation on Julio’s intentions on being traded when Shannon Sharpe called Julio live on his show. When asked if he wanted to stay in Atlanta, Julio responded, “Naw man, I’m outta there.” At first, Shannon believed that Julio wanted to be traded to the cowboys, but it is clear now where he wanted to go. Upon leaving, he made his final farewell message to his team and his fans saying, “Thank you ATL for all the love you’ve shown me over the years,” he wrote on Instagram. “It’s been an amazing 10 years playing for the city and all the fans. I appreciate everything you’ve done for me over the years, and will never forget my time as an Atlanta Falcon. Excited for the next part of my journey here in Nashville. “To the fans, I want to thank you all for the warm welcome for me and my family. We are very excited to be part of the Titans family.”

Although Julio is one of the greatest receivers in the league, even the history of the NFL, the Titans and their Coach, Mike Vrabel still had to make sure he was a right fit for the team. Vrabel called one of the greatest college football coaches of all time, Nick Saban, to ask for advice. Saban was Julio’s coach back in Alabama, and Vrabel told the press that “Saban obviously thinks a great deal about Julio as a person.” In regards to Julio’s chemistry with the rest of the team, it was probably a match made in heaven. A.J. Brown, a phenomenal receiver who has only been in the NFL for 2 years is a huge Julio fan. Brown has the number 11 jersey because of Julio, and upon arriving, A.J. insisted that Julio take his number. But, Julio felt that it was a new age and chose the number 2. 2 times 11 is 22, two of them, 22 members on the team. Everyone is willing and eager to contribute and make the Titans an unstoppable force.

The titans had already made it to the playoffs in the 2020 season, but were unfortunately stopped by the Ravens. Now, with the addition of Julio, their offense will be one of the best in the league. There is no doubt Jones will contribute to the team in a drastic and positive way, and everyone is interested to see how far really he can take the team.