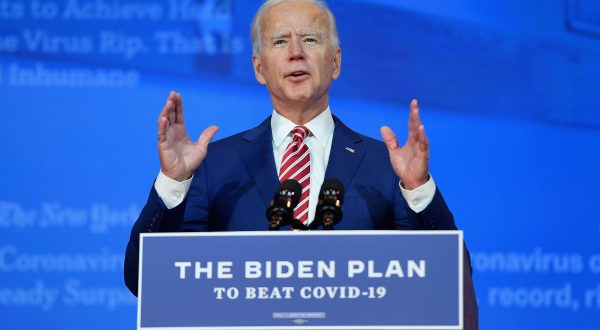 President-elect Joe Biden has just unveiled a new $1.9tn stimulus plan for the U.S. economy, which has been sapped by the coronavirus.

If passed by Congress, the package would include around $1tn in total for U.S. households, with direct payments of $1,400 to all Americans. The relief proposal also included $415bn to combat the coronavirus and $440bn to supplement small businesses.

Biden has promised to beat the pandemic that has killed more than 385,000 people in the U.S., and ran his campaign last year on the vow that he would do a better job than outgoing President Donald Trump on handling the virus. Each day in the United States brings around 200,000 new cases of the virus and 3,000 to 4,000 deaths.

In a speech on Thursday night in Wilmington, Delaware, Biden said: “A crisis of deep human suffering is in plain sight and there’s no time to waste”. He later added, “The very health of our nation is at stake… We have to act and we have to act now”.

Biden’s plan is to supplement the vaccination program with $20bn, including setting up mass vaccination hubs and dispatching mobile units to remote areas. Biden called the vaccine plan in the U.S. so far a “dismal failure”, and his administration aims to vaccinate 100 million people in 100 days. So far, only 11 million doses have been administered, significantly below the end of 2020 goal of 20 million doses administered.

It is unclear if Congress will pass the bill, and Republicans will likely object to increasing the national debt. However, with both the House and Senate now holding a Democrat majority, it is probable that the plan will succeed. However, the backdrop of a U.S. Senate impeachment trial for Trump is sure to be a distraction from the plans of President-elect Biden.