Home / Sports / Is Fahnbulleh the next Bolt 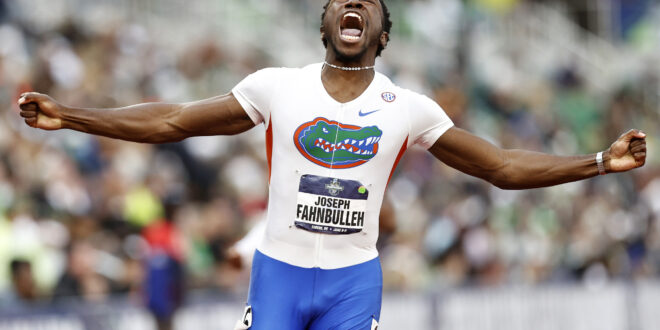 This past weekend, the NCAA track finals were held in Oregon’s Hayward Field. The day was for showing off the peak of each athlete’s talent as they faced off in a plethora of events. But, the name that spread across the field like wildfire was none other than Fahnbulleh. Though only coming in at around 6 feet tall, but having an incredibly strong stature, Fahnbulleh towers over his competition, which evidently is how he has become so successful at sprinting. At this point, it can even be reasonable to say that Joseph Fahnbulleh is one of the greatest collegiate runners ever after his outstanding performance in the 100, 200, and 4×100 races. ‘

Growing up in Minnesota, Fahnbulleh ran outstanding times. HE was a 2x MSHSL State Champion, the 2019 New Balance Outdoor National 100m and 200m Champion, and holds the Minnesota state record in the two sprints. At the beginning of his sophomore season, Fahnbulleh set his goals and expectations in an interview, stating that the winning culture at University of Florida is helping him improve day by day. But, he will not be satisfied until he wins a national title and hits his goal of 19.7-19.8 seconds in the 200 meter.

This past weekend, not only did he become the collegiate leader in one event, but two. Micah Williams, the crowd favorite to win the 100 meter dash after having a personal best time of 9.86, only one of two college runners to reach under 10 seconds. Micah Williams and Fahnbulleh are polar opposites in regards to their strengths and weaknesses. Fahnbulleh, who has a notoriously weak start out of the blocks, as opposed to Micah’s world class start put them at two different spectrums. But, Fahnbulleh, with his insane top-end speed allows him to barrel down the track like a train. In the Semi’s, both athletes faced off in the same heat with Micah leaving Fahnbulleh in the dust. But the finals were a completely different story. Despite the Gator having his usual rough start, he got out quicker than normal, racing past everyone to the finish with a 10 second 100. The 200 was already his race, as he had demonstrated time and time again that this would be no issue. His only competition, Matthew Boling, had failed to keep up with him later in the season, allowing Fahnbulleh to take the win in that event.

Fahnbulleh is one of the very few collegiate runners to win both the 100 and 200 meter races. He still has so much to improve on, and this is what makes him that much more terrifying. If he can fix his obvious weaknesses, there is no telling what he could possibly do later on in his career. His rise to the top has rightfully given him the title of “Fahnbullet”.

The Olympics is fertile ground for motion pictures. While it has drama with a worldwide …