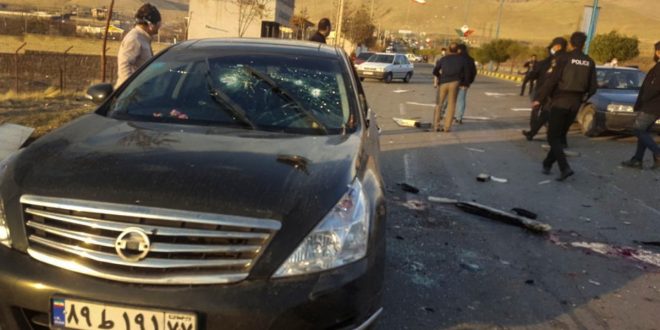 This photo released by the semi-official Fars News Agency shows the scene where Mohsen Fakhrizadeh was killed in Absard, a small city just east of the capital, Tehran, Iran, Friday, Nov. 27, 2020. Fakhrizadeh, an Iranian scientist that Israel alleged led the Islamic Republic's military nuclear program until its disbanding in the early 2000s was “assassinated” Friday, state television said. (Fars News Agency via AP)

On Friday, November 27th, Iran’s top nuclear scientist Mohsen Fakhrizadeh was assassinated. Iranian President Hassan Rouhani has accused Israel for the assassination. Fakhrizadeh was suspected by the West to be the head architect of Iran’s classified military nuclear program.

Iran’s clerical and military leaders have threatened revenge against the West and specifically Israel for the killing, which analysts say is bound to increase tension in the Middle East.

In Rouhani’s speech, he said things such as “Our people are wiser than to fall in the trap of the Zionist regime”, and “Once again, the evil hands of Global Arrogance and the Zionist (Israeli) mercenaries were stained with the blood of an Iranian son”. He said that Fakhrizadeh’s death will not slow down Iranian nuclear development. He also vowed to retaliate against Israel at the “proper time”.

Rouhani’s speech referred to the killing of four Iranian scientists between 2010 and 2012 in what Tehran said was an assassination campaign with the aim of sabotaging its nuclear energy program. Iran continues to deny that it is harboring or developing nuclear weapons.

According to the Tasnim news agency in Iran, the assassination of Fakhrizadeh consisted of a detonation of an explosive-laden car near the scientist’s vehicle, followed by a firefight between the assassins and bodyguards.

Israel, along with the White House, Pentagon, U.S. State Department and CIA have all declined to comment on the incident.

The death of Fakhirzadeh is likely to provoke confrontation between Iran and its foes in the west, in the last weeks of Trump’s presidency. It could also complicate any efforts by President-elect Joe Biden to revive the detente with Iran under the Obama Administration once he takes office, and further attempts by Western countries to reach agreements with Iran.

Previous Examining Online Exams
Next What to Bake During Quarantine