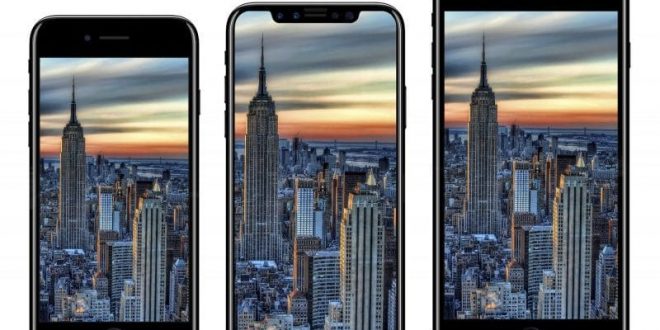 From left to right: iPhone 8, iPhone X, iPhone 8 Plus

On September 12, Apple CEO, Tim Cook, revealed the latest generation iPhones: iPhone 8, iPhone 8 Plus, and iPhone X along with other Apple products at the Steve Jobs Theatre at the brand new Apple Park campus. The event was highly anticipated by Apple fans all over the world as this latest generation of iPhone marked the 10th anniversary of the iPhone. While Apple is only the second player in the smartphone market by sales volume, its innovativeness sets the benchmark for other manufacturers to follow. While the iPhoneX is not characterized by any particular innovative feature, it does come with a set of radically new designs that would force a change in its usage (and therefore user experience) compared to the iPhone 8 and previous generation of iPhones.

A glance of the iPhoneX shows that, unlike previous generation of iPhones, its 5.8-inch display fills practically the whole front side of the phone with ultra slim bezels surrounding it and this allows for a smaller form factor compared to iPhone 8 Plus which has a similar display area and only slightly larger than iPhone 8 as shown in the above image where iPhone X is shown in the middle between iPhone 8 on its left and iPhone 8 Plus on its right. There is no longer a Home button in the bottom of the screen and there is only a small black area on top the phone where the front camera and other sensors are located. A finger stroke replaces the use of the Home button and Touch ID is embedded in the screen. Less obvious maybe is the fact that the display itself is a Super Retina OLED with 1 million to 1 contrast ratio. Unlike traditional passive LCD displays in previous generation iPhones, the OLED display has active pixels that can emits light therefore eliminating the need for backlight and therefore allowing deeper black and higher contrast. Apple’s True Tone feature which adjusts the display’s color temperature under different lighting conditions results in more pleasant display and better color representation.

A more durable glass protects the front and back sides of these new generation iPhones. And similar to Apple Watch, the new iPhones support Qi wireless charging technology such as the one available at Starbucks. Combined, these design changes eliminate the need for wired electronic connectors and therefore allows resistance to water and dust; a feature that would be appealing to those with active lifestyle or to those who simply want more assurance in the durability of their expensive gadget in case of unexpected accidents.

Despite the new display’s impressive design, there is one potential drawback. The small area that obstructs the top of the display is permanent and could be an annoyance in some cases. While the obstruction is likely to be fine in most applications however video playback demo in landscape mode shows that it does hide part of the video and this may not be acceptable to many users. Presumably this can be avoided by forcing the video playback to the fully visible rectangular area only but this comes at the expense of smaller effective video screen area.

The iPhone X revolutionizes camera technology with the front and back TrueDepth 3D cameras that can result in better sense of depth on images taken. In conjunction with the TrueDepth camera, a Face ID feature is added that Apple claims can create a “precise depth map of your face.” Machine learning technology supposedly allows the Face ID feature to adapt to physical changes in user appearance over time. This feature allows a more robust security authentication than the current Touch ID and it can be used to unlock and authenticate. Given that we are living in the age where data and identity thefts are becoming a daily threat to our lifestyle this feature could be quite important for many users. On the other hand, using Face ID to unlock the phone also means that you must face the phone in order to unlock it which could be an annoyance in some cases. There is also a question regarding the reliability and maturity of the technology as Apple demos show that the Touch ID feature is still unstable. Regardless, the same technology also results in other interesting features such as Animoji and Picture Mode effects. The new iPhone is capable for analyzing your facial expression and mirrors it in 12 different Animoji (animated 3D emoji) that one can use for messaging without revealing your actual face. Picture Mode allows user to take sharp selfies with blurred background and custom lighting effects. On the rear side, iPhone X features two TrueDepth cameras, a high resolution fast-sensing 12MP camera and a lower resolution telephoto camera, both equipped with optical image stabilization (OIS).

Finally, Apple pushes the boundary on smartphone price with the iPhone X; the 64GB version is priced at $999 and the 256GB version is priced at $1149. Apple does provide their customers with cheaper alternatives with iPhone 8 Plus which is $200 cheaper and with iPhone 8 which is $300 cheaper than the corresponding iPhone X models. iPhone 8 and iPhone 8 Plus supports compatibility with iPhone 7 in term of form factors and use the more conventional LCD display technology but they also supports many of the new features in iPhone X such as the upgraded A11 processor, True Tone colors, wireless charging, and dual main cameras on iPhone 8 Plus. Undoubtedly there will certainly be many iPhone fans who will transition to these new generation iPhones despite the hefty price tag, however it remains to be seen whether these new generation iPhones will improve Apple’s market share. iPhone 8 and iPhone 8 Plus are available already and iPhone X will be available on November 3 with pre-order starting October 3.

Megan is a senior at The Harker School. She is interested in applied mathematics, computer algorithms, artificial intelligence, cognitive vision science, and economics. Outside of school, she is a tutor and mentor at the Boys and Girls Club of the Peninsula (BGCP), a regular volunteer at Second Harvest Food Bank (SHFB), classical pianist, and an avid figure skater. In her free time, she enjoys exploring hiking trails in the Bay Area and Lake Tahoe, reading science fiction books, WIRED and The New Yorker magazines.
Previous Turn Your Attention From Cars to Cows
Next Advice for Middle Schoolers