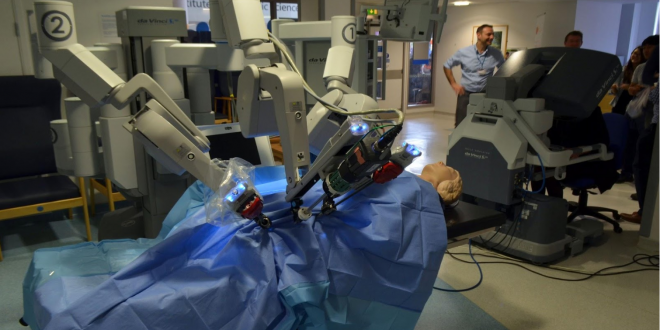 Intuitive Surgical is a medical company based in Sunnyvale, California. Their goal is to create robots that can be controlled by humans to help surgeons perform surgeries.

Intuitive Surgical’s main product is the Da Vinci Surgical Robot; a robot that surgeons manipulate using a handle like device. The robot is a multi-million dollar product, and is in high demand in many Asian countries such as China and India. Because of the robot’s slender and mobile “arms”, it allows surgeries to be performed without opening a large cut in the patient’s body. Large cuts take a long time to heal and are also potentially dangerous to the patient.

This is an example of the future of robotics. Obviously, this is helpful to humanity because it makes the job of surgeons easier, safer for the patient, and reliable. But there is always the possibility that surgeons lose their jobs if artificial intelligence replaces them.

I was invited in July to take a tour of their headquarters in the Silicon Valley. They explained to us what kind of process they went through to develop it. Then we were allowed to test the robots out on a little board with pieces on it. At first we used tools to attempt to move the pieces around. Then they allowed us to use the robot to do the same task. With the camera attached to one arm, we would use another arm to grab pieces and move them around, which was simple and more intuitive compared to metal tools.

Intuitive Surgical is currently flourishing in the market. As of July 29, 2018, the stock price of the corporation is worth around $519. The future of the company is very bright and hopefully will continue to succeed. Intuitive Surgical is a company with a promising future and that may play a big role in medical robotics.

Previous The Media’s Impact
Next Teslas: The Ups and the Downs