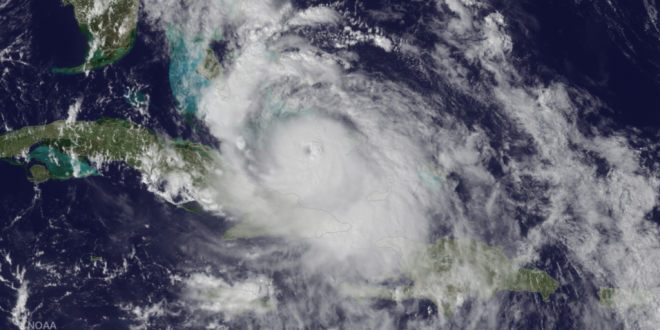 Earlier impacting Haiti, Jamaica, Cuba, Dominican Republic, and the Bahamas, Hurricane Matthew was a major cyclone on Oct. 8, 2016, advancing along the southeastern coast of the United States.  In some areas along the Atlantic coast, the storm surge was measured at over 4 feet.

During its worst, Hurricane Matthew had one-minute sustained winds at 160 mph, making it the first Category 5 Atlantic Hurricane since Hurricane Felix in 2007. In addition to the massive and widespread destruction, Hurricane Matthew has caused around 900 deaths including 877 in Haiti and 13 in the United States.

As a result of Hurricane Matthew’s trail through southeastern states Florida, Georgia, South Carolina, and North Carolina, there have been 2.2 million power outages and storm damages of over $5 billion.

Developing from a tropic wave in Africa on Sept. 22, Matthew had developed into a strong tropical storm and intensified as it traveled across the Caribbean Sea. After tracking upon a curved path towards north, the hurricane made landfall on the Tiburon Peninsula of Haiti on Oct. 4. It proceeded to make a landfall at Cuba and continued toward North. Although the land interaction had weakened the storm, Matthew regained Category 4 intensity at the Bahamas. Matthew then descended on the coast of southeastern United States, making landfall on South Carolina.

In preparation for Hurricane Matthew, many shelters in Cuba, Jamaica, and Hispaniola were opened and around 1 million people in Cuba were evacuated. This helped many people avoid danger and deter many casualties. Currently, numerous aid agencies and the military personnel are being deployed in areas of extensive damage including Haiti to help with the aftermath.