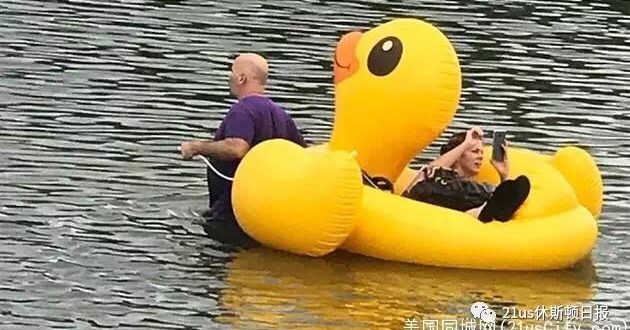 Weeks have passed since hurricane Harvey made landfall in Texas, but the devastation remains. Thousands of homes were destroyed during the heavy rain and the death toll continues to increase. An estimated 30,000 people are left in need of shelter, and the calculated total loss is as much as 75 billion dollars. For the towns and counties who still face an uncertain future, recovery from this monster could take years. However, things always have a brighter side. Tragedy brings out the best in people, and countless acts of kindness sparkle in Houston community.

To rescue those in need, Nick Sheridan drove nearly 200 miles with his big rig. He and three other truck drivers helped more than 1,000 people in emergency evacuation areas. When facing the camera, Sheridan told ABC Good Morning America reporter that his previous military experience gave him the idea to take actions. “My whole life I’ve kind of been in that civil service role, but being on my own gave me the ability to go where they needed me rather than be stationed to go direct traffic on a street corner or something like that,” he said. “I was really able to put my equipment to use here being a freelance rescuer.” Inspired by him, many others joined the rescue team as well, some by boats and some by trucks. Dr. Stephen Kimmel from Clear lake Regional Medical Center even canoed through flood water to perform surgery on a 16-year-old boy, eventually saving his life. “Sometimes you have to do whatever it takes,” Kimmel said of his efforts. “This young man’s life would have been changed for the worse forever if we had not been able to perform surgery when we did. In the end, it all turned out very well.”

During this difficult time, even those who were safe from the floodwaters still had worries. With winds of 130 mph and a diameter of 280 miles, the category 4 hurricane devastated Texas with its power. Extremely strong winds damaged roofs, smashed cars and tore thousands of houses apart. Houston is known for its susceptibility to flooding because of its flatness, so water levels in some areas stayed over 50 inches for more than a week. These factors resulted in 30,000 people with nowhere to go and nothing to eat. However, Texans’ heartiness and solidarity were once again demonstrated. More people volunteered their time and resources to provide help for the homeless. Jim “Mattress Mack” McIngvale, owner of Gallery Furniture, has opened several locations across Houston to help shelter the displaced. “I decided we’d open the store and make it a shelter for all the people who were disaffected,” McIngvale told ABC News. “We have these giant 24-foot box trucks that can get through 5 to 6 feet of water. We sent ’em out, picked up about 200 people. They were stranded on bridges, they were stranded in convenience stores, they were walking through the water with snakes and alligators, and we brought ’em out here.” Restaurants and food stores made free meals for everyone in need. The bakers at El Bolillo Bakery in Houston baked as much bread as they could to deliver to nearby havens. Cypress Creek residents also cooked chicken for soldiers and volunteers helping people evacuate the flooded neighborhood.

Although Hurricane Harvey destroyed houses, caused financial loss, and devastated families, there were always more people who stood up together against the disaster, showing incredible acts of kindness. Why do they have so much faith in Texas? Courtney, 48, an interior designer from Houston gave the answer. “Basically, as a Texan, you know, you’re called to duty when something like this happens,” he said. “If you’re a hunter and a fisherman and a redneck, man, then you got your boat out here. And if you don’t, we don’t claim you as a Texan.”

Share
Previous They See Me Mowing My Front Lawn
Next Sleep In: Schools are Finally Starting Classes Later in the Day