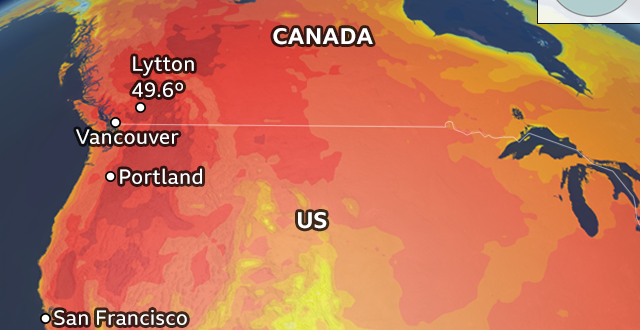 Hundreds of sudden deaths, many of them suspected of being heat-related, have been reported during Canada’s record-breaking heatwave, officials say.

A total of 486 fatalities were recorded over the past five days in British Columbia alone, a 195% increase on the usual amount over that period.

Canadian Prime Minister Justin Trudeau offered condolences to families of the victims of the heat, many of whom were elderly.

Abnormally high temperatures have been recorded across North America. Lisa Lapointe, British Columbia’s Chief Coroner, said on Wednesday: “It is believed likely that the significant increase in deaths reported is attributable to the extreme weather BC has experienced and continues to impact many parts of our province.”

She said many of those who died in the heatwave had lived alone in homes that were not ventilated. Lapointe added that the province had only seen three heat-related deaths over the past three to five years.

On Wednesday evening, the town of Lytton, British Columbia, was evacuated because of a wildfire – a day after it recorded Canada’s highest ever temperature of 49.6C.

Mayor Jan Polderman told CBC News: “The whole town is on fire. It took like a whole 15 minutes from the first sign of smoke to all of sudden there being fire everywhere.

The heat over western parts of Canada and the US has been caused by a dome of static high-pressure hot air stretching from California to the Arctic territories. Temperatures have been easing in coastal areas but there is not much respite for inland regions.

The weather system is now moving eastwards over the Prairie provinces – Alberta and Saskatchewan and parts of Manitoba have been placed under Environment Canada heat warnings.

In the Pacific Northwest region of the United States, temperatures hit 46.6C in Portland, Oregon, and 42.2C in Seattle, Washington, the highest levels since record-keeping began in the 1940s, according to the National Weather Service.

Authorities in Oregon say that at least 63 people have died from health issues related to the extreme heat. 16 people are also reported dead in Washington state.

U.S. President Joe Biden has linked the heatwave to climate change in a speech.

Previous Sha’Carri Richardson disqualified
Next Windows 11: The Unexpected Unveiling of the Expected