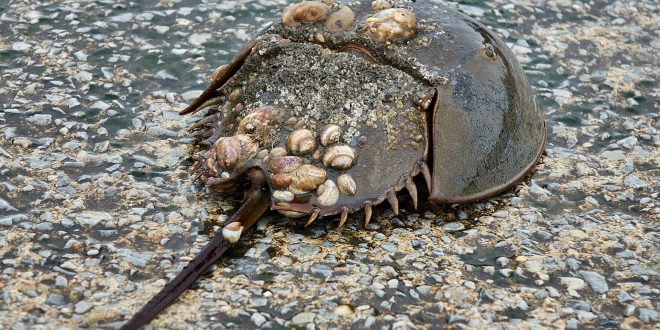 For some reason, horseshoe crabs have recently been dying in massive numbers off Japan’s southern beaches near Kitakyushu. Typically, the shallow waters of Kitakyushu serve as a suitable breeding ground for the crab, Tachypleus tridentatus. Yet, this year they have been dying in scores.

Although horseshoe crabs live in deep water for the majority of their lives, they come to a shallower coast in massive groups in order to mate and lay eggs. It is normal for some of these creatures to die off, however, as of now, nearly 500 dead crabs have been reported washed up shore. Conservationists at Japanese newspaper, Asahi Shimbun, say that up to 10 crabs die each day, a mortality rate eight times higher than normal.

The horseshoe crab is a prime example of a “living fossil” as it has remained unchanged for 450 million years, surviving 5 mass extinctions. However, is this the end of the line for this sturdy survivor?

The crabs have actually been at risk for decades. Over the years, habitat destruction and overfishing have damaged their multiple breeding grounds. In fact, they are now classified as endangered animals and there are still no enforced laws that protect them. As coastal areas continue to be built upon, the crabs continue to decrease.

As for the cause of this massive die-off, it remains a mystery. Some experts cite the effects of global warming with the decrease of oxygen levels to a warming ocean, while others have postulated parasites or a disease. Perhaps even a combination of all possible reasons.

Previous Paper or Electronic?
Next The Challenges of Self-Driving Cars