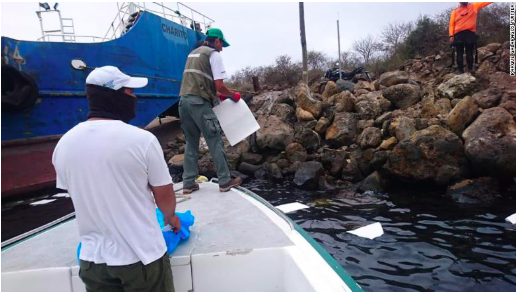 A large cargo ship capsized on December 22nd when loading containers aboard the vessel near the Galápagos Islands, located hundreds of miles located off Ecuador’s coast. The Galapagos Islands is a designated United Nations Educational, Scientific, and Cultural Organization (UNESCO) World Heritage Site. These coveted world heritage landmarks are granted status to the most special and scientifically advanced ecosystems in the world. This island is also home to the scientific research done by Charles Darwin, who was an English naturalist, biologist, and geologist. He was able to discover the theory of evolution by using his scientific research done on the islands.

The unfortunate overturn of the cargo ship led to a huge 600-gallon oil spill that occurred after a larger container was in the process of being loaded onto the ship’s deck. Emergency teams near the island quickly began aiding the clean-up of the big oil spill in the morning. This oil spill situation will likely anger many scientists and environmental activists who have worked hard on protecting the Pacific Ocean archipelago. Naturalists and conservationists have already raised their concern that the ecosystems near the Galapagos Islands are in danger. The Pacific Ocean archipelago is a site that has many unique types of inhabitants that cannot be found anywhere else in the world. Sea lions, giant tortoises, and finches are some of the species of animals found in the island’s waters. While one of the world’s most revered natural destinations, over-tourism, climate change, and now this recent oil spill have all threatened the beautiful yet delicate Galapagos Islands in recent years.

Previous Heart Risk That Will Surprise You
Next GMO Foods