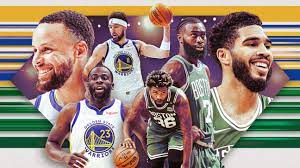 It’s June, and the National Basketball Association will again hold its best of seven gauntlet of a competition. This year, two historic teams battle it out, the Golden State Warriors and the Boston Celtics, two teams that have not met in the finals since 1964. The first four games of this competition have already played out, with the series tied with two wins a piece. The Warriors possess home-court advantage heading into game five, yet who will end up with the NBA title is nowhere near certain.

The Warriors lost out on a big opportunity in game one to pull ahead of the Celtics at Chase Center, squandering a double-digit lead in the third quarter to a monster fourth quarter by the Celtics, ending in a score of 120-108. The so-called “3rd quarter Warriors” showed up that night, a name coined due to the legendary status of their post-half-time comebacks, but apparently did not have enough gas in the tank to surmount the onslaught of the Celtics players. Despite the loss, Stephen Curry put up big numbers of 34/5/5, but due to the poor shooting of second option Klay Thompson and the non-factor defense of Jordan Poole, the offensive potential just was not there. Jayson Tatum had a bad scoring night, but seemed to make every right play on the floor, playmaking so that role players Al Horford, Derrick White, and Marcus Smart could each tally up 18+ point games. Jaylen Brown had a beautiful game for himself, racking up 24 points, and seemed to make every single shot he tried that night.

Coming into game two, the Warriors were feeling the pressure. Historically, when teams are on the road and come out ahead 2-0 in the series, the team wins the finals a whopping 85% of the time. With the stadium roaring, the dubs were able to take an early lead in the third quarter and took that all the way to the end of the game, resulting in a blow-out victory of 107-88. Once again Curry had a beautiful game of over thirty points, supported by the 17 points of Poole. Poole nearly single-handedly led an 8-0 point run against the Celtics at the end of the 3rd quarter, finishing it off with a thunderous buzzer-beater, driving the team to an over twenty-point lead. While Tatum had a bounce-back game in terms of points scored, the rest of the team didn’t look like the same team as game one. Coughing up the ball every other possession and not making the right plays, the Celtics had big problems with turnovers, leading to the dominance of the Warriors in game two.

The teams flew back to Boston for game three, where they would stay for the next two games. The Warriors seemed to have all the momentum going into this game, yet things didn’t look pretty at the end of the first quarter, barely squeezing out 22 points to the Celtic’s 33. Warriors had another 3rd quarter surge, as many dubs fans will look forward to each game, but did not have enough left in the tank to finish the job, with the Celtics again having a masterful fourth quarter to finish the game at 116-100. Curry once again proved the doubters wrong, putting up 30+ points once again, paired with Thompson’s good shooting night of 25 points. Yet, this time it was Draymond Green who didn’t show up. Having a lackluster game one and two, dubs fans were looking towards a bounce-back game from him, but to no avail. Green finished with two points on 1-of-4 shooting, four rebounds, three assists, and one block in 35 minutes before fouling out late in the game. By the end of game three, Green has had 15 fouls to match his 15 total points, an abysmal showing that has dragged the team down immensely.

It was do or die for the Warriors coming into game 4. Losing this game would mean going down to a 3-1 deficit, a lead that historically meant a nearly impossible hole to crawl out of. One man, Stephen Curry, kept this from becoming a reality. Starting out hot in the first quarter, he maintained a consistent presence throughout the game, making crazy shots and impact plays, racking up a beastly 43 points and 10 rebounds. Despite being grabbed and pushed around all game, and the referees refusing the call many obvious foul calls, Curry had one of the most impressive finals games he has had in his career, carrying the Warriors to a victory of 107-97. The two others on the Warriors that showed out were Andrew Wiggins and Kevon Looney, two underappreciated role players that had played extremely consistently and well over the last four games and throughout the playoffs. Wiggins seemed like the de facto second option, tallying 17 points and a career-high of 16 rebounds. His hustle plays allowed for numerous second-chance shots and nearly single-handedly kept the Warriors afloat in the fourth. The Celtics played a disappointing game, missing numerous open shots in the fourth allowing for the Warriors to press on an 18-5 run towards the end of the fourth quarter, finished off by the dagger three from Curry. The Celtics were led by the incredible shooting of Brown once again, who made several crucial shots late in the second half. Tatum once again had a lackluster game, committing 6 of the Celtic’s 16 turnovers. Smart and White had a good showing, both giving 15+ point nights, and Robert “Timelord” Williams III had an incredible night on both ends of the court, protecting the paint and providing rebounding potential.

Both teams look to game five back in the Bay to see who will come out with the 3-2 lead. The competition has been fierce between the two squads — which one will come out as the champion will depend on numerous factors — will the Celtics have a good Tatum shooting night? Will they be able to quell the turnovers? Will the Warriors role players and Green show up at home? Will Curry continue his legendary finals run? We will see, and it will be exciting to see how it all plays out.