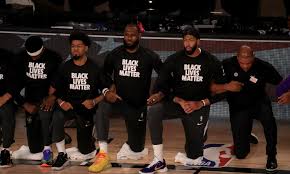 Amid the tensions of racial injustice, the NBA has just started scrimmages between the teams. But, as many expected, due to these difficult times, many took a knee during the National Anthem in protest of racial injustice. Here, we will see what inspired this, and what players have to say about the stand that they took.

The NBA’s return began on Thursday, July 30 with what many of the players described as a “unified” demonstration against racial injustice in the USA. Though it has been a long time rule that players were required to stand during the Anthem, NBA commissioner Adam Silver waived the rule. These demonstrations were inspired by former NFL star Colin Kaepernick. This continued over the weekend where almost every player took a stand, but, there were a few exceptions.

Players like Jonathon Isaac and Meyers Leonard decided not to kneel during the anthem. Isaac, who also didn’t wear a black lives matter shirt said, “Absolutely I believe Black lives matter. But, Kneeling while wearing a Black Lives Matter T-shirt doesn’t go hand in hand with supporting black lives. I don’t think kneeling or putting on a T-shirt for me personally is the answer. I feel like for me Black lives are supported through the gospel…..” This was his chance to show everyone that this is beyond skin color and that the answer to all the problems was Jesus. Leonard decided to not kneel said that he made this decision due to his brother who served in the military. Nevertheless, his teammates understood.

But the President had a different take on the actions of virtually everyone in the NBA. This was made clear through his interview with Fox News when he said he believes players taking a knee during the anthem is “disgraceful.” He said that through the many bills that he signed, he has helped America have more racial equality and that he has done more for black people than any other president, aside from Abraham Lincoln.

There are always two sides to one issue. Players stated that kneeling wasn’t about disrespecting the flag, but as a way to take a stand against police brutality and racial injustice. Many others feel that this is disrespecting the military and the heroes who fight for our country every single day.