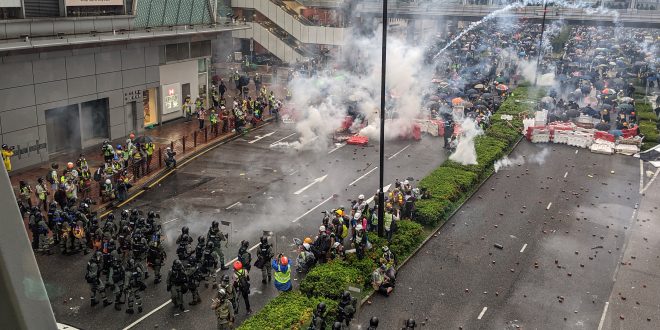 The coronavirus pandemic has put a strain on Hong Kong’s “One Country, Two Systems” framework and has paved the way for Beijing’s central government to exercise complete control over Hong Kong.

Since the British handed the territory over to China in 1997, central authority government officials have looked to underhanded ways of suppressing pro-democracy movements in Hong Kong. In recent years, Beijing has violated the Basic Law, a mini-constitution established by Beijing itself that guarantees Hong Kong’s autonomy until 2047.

In June 2019, Hong Kong protests began in opposition to China’s extradition bill which would allow Hong Kong citizens to be deported to mainland China under suspicion of criminal offenses.

Hong Kong residents argued China would use the bill to target pro-democratic leaders and journalists. Even after the bill was suspended and later withdrawn, protests continued in fear of China’s next infringement on Article 22 of the Basic Law which prohibits mainland China from interfering with Hong Kong’s affairs.

Protests such as the ones against China’s extradition bill grew in size and violence until late December of last year when the first coronavirus outbreak began to create a dampening effect on pro-democracy mass gatherings.

Beijing has been accused of dismissing its obligations to the World Health Organization by initially refusing to take responsibility for the outbreaks and by threatening to restrict exports of medical supplies.

Sensing the growing criticism coming from foreign powers, Beijing’s fear of disconnect from the world market sparked a need to exert control over Hong Kong. Hong Kong is a popular hub of commerce and would seemingly guarantee access to global trade despite the international disapproval towards China. Hong Kong played a similar role during the Cold War by bridging the gap between communist China and the parts of the world with capitalist traditions.

In order to accomplish their goal, the Central Liaison Office, China’s leading agency in Hong Kong, claimed the authority to “express stern views on important matters involving the relationship between the center and the special administrative region.” They claimed the right to exercise authority from the central government in China over the people of Hong Kong, once again disregarding Article 22 of the Basic Law.

Beijing politicians justify their violation of the Basic Law by claiming the Central Liaison Office was secretly established in Hong Kong as a news agency long before the Basic Law was put into place.

The day after the declaration from the Central Liaison Office, Hong Kong’s police arrested fifteen pro-democratic politicians with the charge of organizing and participating in peaceful protests against Beijing. The citizens who were arrested were part of the pan-dam party, a group that considers the local Hong Kong government to be a puppet of Beijing’s central government. Many of the arrested pan-dem leaders are considered respected elders in Hong Kong such as the barrister Martin Lee, 81, and the media tycoon Jimmy Lai, 71.

At present, although other countries including the UK have backed Hong Kong’s protests, the idea of an inevitable military crackdown by mainland China is not entirely out of the question. After the Tiananmen Square massacre of 1989 which ended with at least 10,000 civilian deaths, Beijing managed to quell international governments with shares from China’s domestic market and other economic benefits.

With both the coronavirus and China’s economic payolas reducing foreign interference, the prospect of Beijing exerting complete control over Hong Kong becomes more and more likely despite multiple blatant violations of the Basic Law.