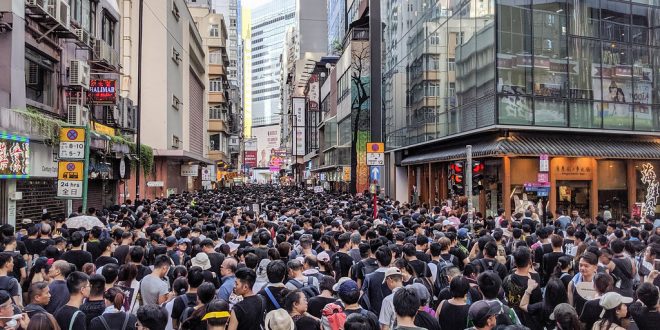 Anti-government protests in Hong Kong continued this week as protesters took to the streets wearing face masks to defy the face mask ban put into effect. On Friday, chief executive Carrie Lam announced that she would use emergency powers to enforce the ban, which was the first time these powers have been utilized for more than 50 years. A week of violence and unrest in Hong Kong came after mainland China was celebrating its National Day on October 1st with festivities and a military parade. Hong Kong’s metro system was shut down and an 18-year old protester was shot by police for the first time. The protester was shot in the chest and placed in critical condition after allegedly attacking two police officers. A 14-year old was shot in the leg on Friday by police but has been in stable condition after operation. On Sunday, protests started with a peaceful march but turned violent when police started firing tear gas.

Among the protesters’ demands are pro-democracy reforms and an inquiry into the police department’s use of violent force on protesters. Protesters fear that this new mask ban is the first step in their rights being encroached on. A fine of up to 25,000 Hong Kong dollars(around $3000), and up to a year in prison will be placed on anyone wearing a mask in a public gathering, but so many people have defied the ban that the ban is unenforceable by police. Many protesters think that risks like this are worth it if they can defend their homeland and the rights of the people.