Home / Lifestyle / A History of Crew and Why You Should Row 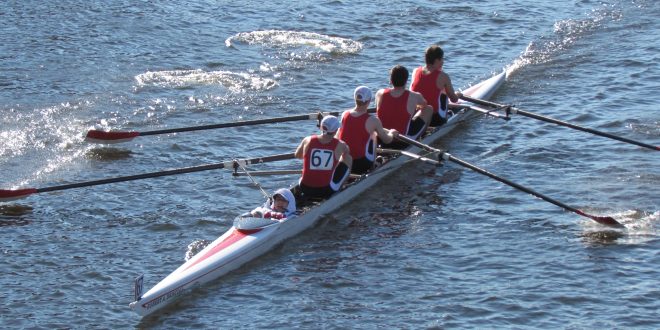 A History of Crew and Why You Should Row

Crew, also known as rowing, is a traditional sport that first appeared in ancient Egypt. It is based on the use of oars to move forward through water. There are some different classes in athletic crew competition, ranging from an individual shell (also called a single scull) to an eight-person shell with coxswain (also called a coxed eight).

The first professional crew competition was held on the Thames River in London in early 10th century and amateur competitions began with the arrival of private crew clubs at British public schools near the end of the 18th century. Public crew clubs also started at around the same time. Moreover, in 1843, the first American college rowing club was formed at Yale University. Fast forward to today, there are more than 150 countries that have crew as a sport.

The seats in the boat face toward the stern (the back of the boat), and rowers use oars which are held with oarlocks to propel the boat forward. The sport requires strong core balance, physical strength, flexibility, and especially teamwork.

There are two types of crew sport. The first type is called sweep, which means each rower has only one oar, held with both hands. This is generally done when the number of rowers are in pairs, like four and eight. The other type is called sculling, which  means that each rower holds two oars, one in each hand, and it is usually done with single, double, and quad teams. The oar in the sculler’s right hand extends to port, and the oar in the left hand extends to starboard. Generally, the lightest person rows in the bow seat at the front of the boat.

Rowing is one of the non-weight bearing sport that exercises almost all the major muscles, including quadriceps, biceps, and abdominal muscles. This sport can improve cardiovascular endurance as well as muscular strength. Research shows that high-performance rowers generally tend to be tall and muscular. Moreover, rowing is a low impact activity, so twist and sprain injuries are rare. However, if one rows with poor technique, especially rowing with a curved rather than straight back, injuries and back pains may happen. It is also common for blisters to occur, especially in the beginning of one’s rowing career, as every stroke puts pressure on the hands. Over time, rowing tends to harden hands and generates protective calluses.