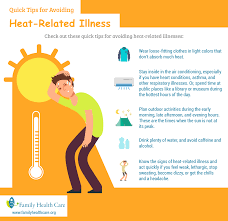 It is already the middle of summer, and in places all around the world, this means extreme heat. In order to combat this, we need to understand the risks when encountering extreme heat, as well as how to combat it. Exposure to heat as well performing physical activity can lead to an increase in your bodies temperature, causing heat stress. Your body tries combatting this by bringing your bodies temperature down, leading to heat stress if your body is undergoing extreme homeostasis for too long.

Many of these people who could experience these illnesses work outdoors. A recent study using California state-wide workers compensation data showed that public administration, agriculture, forestry, fishing, hunting, and construction had the highest cases for heat related illnesses.

A new finding associated with heat stress is kidney injury. The higher the body temperature, the higher the risk of acute kidney injury, which could lead to a range of illnesses and even death. A serious condition involving kidneys is rhabdomyolysis, which is caused by high body temperatures and physical exertion. This condition is due to muscles releasing too much proteins and electrolytes into the blood causing kidney damage.

One way to combat this is to create a stable workplace environment. These factors include assessing risks, limiting heat exposure, reducing metabolic heat load, acclimating workers into the environment, and encouraging healthy habits such as nutrition and drinking enough water. There are also education programs that could be a key factor in workers understanding the risks and methods of preventing this. This is a crucial issue for the health and safety of all workers. Over 160 thousand people died in 2017 just from heat stroke.

Heat stroke is a big issue that many people neglect and fail to talk about. It is a big cause of workplace deaths and needs to be addressed in order to make people more informed of this issue.