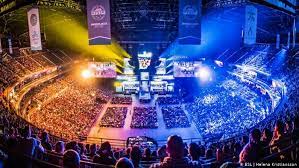 Has Esports Really Become a Sport?

Many have never considered Esports to be real sports, but something that no one can deny is its massive spike in popularity over the years. The first signs of Esports occurred at Stanford in 1972. It was a competition among invited players to battle it out in a game called Spacewar. Later, in 1980, video game competitions hit the mainstream when Atari held the Space Invaders Championship. The real boom in the popularity of video game competitions happened when Twin Galaxies was created. This organization worked with the Guinness Book of World Records to keep track of all the video game world records. Competitive gaming became more popular with the race to get top scores in games such as Pac-Man and Donkey Kong which could be found in arcades all around the world.

A new age of gaming came with the Nintendo Entertainment System leading the charge with their almost revolutionary controls, graphic quality, gameplay, and accessibility. They made video games accessible all around the U.S. Not only did they achieve these, but they also fueled popularity in Esports when they hosted the Nintendo World Championships in 1990 and even more later on in 1994. With stronger internet and PC gaming taking off, Nintendo was only the beginning of this long journey. Gaming at home became more and more regular with the use of PCs. People could play with one another around the globe, leading to the rise of Esports teams. Teams such as Liquid, C9, Faze, Sentinels, and many more rose up around the world. They started looking for the best players in their respective nations and it has basically turned into a real sports draft. You could sell players, lend them, buy them. They would go to tournaments, win money, and gain popularity. Not only would the Esports Teams gain revenue through tournament winnings like regular sports, the players that they bought would also grow popularity on streaming services such as Twitch. It is a growing network of teams, players, and fans.

The real question is if Esports is a real sport or not. Like any other sport, it has had its early beginnings with its small tournaments and prizes. But over the recent years, it has taken off to a whole new level that no one could have imagined. Its fanbase is just as large as any other sport like soccer and football, and its players are just as dedicated to win, and make their fans happy.