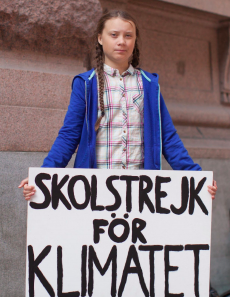 Climate change has resurfaced as a trendy topic as activists like Greta Thunberg have brought renewed passion and vocalization to the issue. Greta Thunberg is a 16-year old environmental activist on climate change who has gained international attention for her critiques against public and political leaders for not recognizing the severity of climate change and taking enough proactive action. Most recently, she sailed across the Atlantic in a racing yacht equipped with solar panels and underwater turbines in the first ever carbon-neutral transatlantic crossing to demonstrate her belief in the importance of reducing carbon emissions.

Thunberg speaks from the youth perspective and is concerned that humanity is facing an existential crisis due to climate change that will disproportionately affect young people. Even though it is common knowledge that the world must reduce carbon emissions in order to curb rising temperatures , Thunberg questions why individuals and countries as a whole aren’t making a larger effort to curb carbon emissions and that carbon emissions, in sum, is actually increase.

She hypothesizes that the individuals aren’t intentionally trying to increase carbon emissions; they simply do not understand the severity of the environmental consequences of their actions and therefore fail to recognize the speed in which change is needed. From a policy perspective, Thunberg claims that politicians and decision-makers must be in harmony with scientists. While scientists have produced significant evidence of the effects of climate change, like rising sea levels as a consequence of rising temperature levels and more frequent occurrence of natural disasters, Thunberg believes policy makers are not reacting fast nor aggressive enough. The possibility of reducing the speed of climate change can only be achieved, in her opinion, by reducing carbon emissions more than the 1.5°C commitment made as a part of the Paris Agreement. Hopefully, Thunberg’s vocalization and international attention will bring more awareness and eagerness to taking tangible action and ultimately resolving climate change.

Previous When Is It Best To Brush Your Teeth?
Next Don’t Suppress Your Negative Emotions