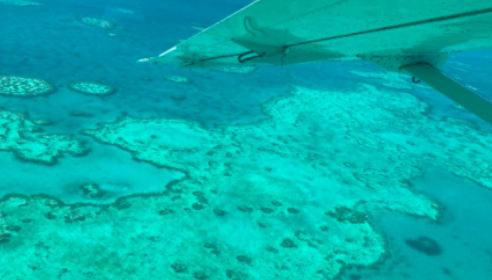 Coral reefs are large colonies of animals called coral polyps that rely on colorful algae living inside of them for food. The algae photosynthesize nutrients from sunlight which gives coral its green, brown, and red coloring. However, the coral polyps expel algae that live inside their tissues when the temperature of the water changes and cause the reefs to turn white, a phenomenon known as coral bleaching. This year, the Great Barrier Reef, located off the coast of Queensland, Australia, experienced its worst mass bleaching event in history.

Terry Hughes, a director for the ARC Center of Excellence for Coral Reef Studies, and other researchers from the Great Barrier Reef Marine Park Authority flew over the coral reefs about 11 times over a stretch of 9 days to survey the impact and severity of the coral bleaching event from an aerial view. They discovered that the surrounding reefs around the Great Barrier Reef, which stretches over 1,500 miles, have all been severely bleached.

Researchers say that the rapid increase in the Earth’s temperature due to the trapping of greenhouse gases is at fault for the widespread bleaching. As the atmosphere becomes warmer, the ocean also rises in temperature. When ocean water temperature fluctuates and becomes too warm, coral bleaching occurs. Bleached coral has significant impacts on the ecosystems around it. While bleaching does not immediately kill off the coral, if the temperature stays at a constantly warmer temperature, the coral reef will eventually die. Furthermore, bleached coral destroys habitats for many marine life species because about one third of marine life species rely on the coral reefs for their circle of life.

Previous Introduction to Myocarditis
Next Longevity in Nangano