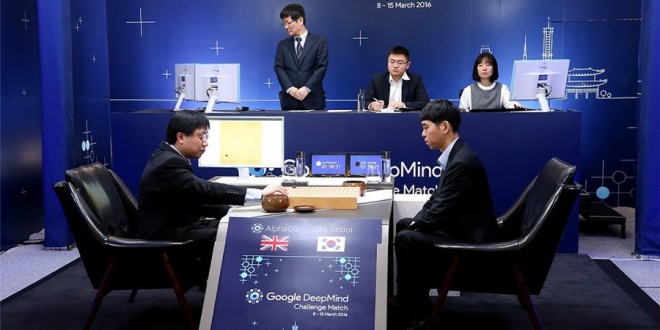 Go: One Step Closer to Skynet

Computers are starting to be better than us at many things. Recently, one of these things became the traditional chinese game we know as Go. Not long ago, computers have been able to consistently beat the best humans at chess, jeopardy, checkers, and most games by calculating every possible outcome. However, this proves difficult in Go, as it is immensely complicated and has nearly infinite possibilities.

Until now. Google programmed a robot, called AlphaGo, and challenged one of the best Go players in the world, a Korean player named Lee Sedol in a best of 5. AlphaGo won the first 3 games in a row, immediately ensuring its victory. However, it did lose the fourth game, and then continued on to win the last one.

The computer made moves that would have never been expected, and was at first regarded as a mistake. However, after a couple turns, it all connected together. It was something no human would have ever thought to do. After Sedol’s loss, many people felt sadness, as the last game that humans were better than machines at has been taken over by the Robots. Now, it’s only a matter of time before machines take over the world.