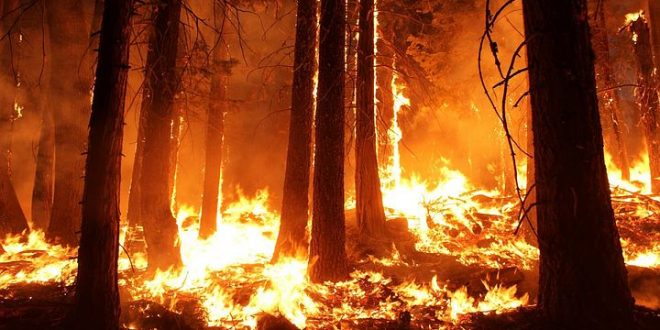 In May 2016, a million and a half acres of land around Fort McMurray in Alberta, Canada was caught in one of the largest wildfires in recent history, and the resulting firestorm caused the evacuation of just under 90,000 people. Again, in 2017, the Northern California wildfires, mainly the Tubbs fire of Santa Rosa, caused the air quality index of the entire San Francisco Bay Area to rise to “Hazardous Level”.

So what is so dangerous about wildfires that displace so many people? The smoke released by any type of fire (forest, brush, crop, structure, tires, waste or wood burning) is a mixture of particles and chemicals produced by incomplete burning of carbon-containing materials. All smoke contains carbon monoxide, carbon dioxide, and particulate matter (PM or soot). Smoke can contain many different chemicals, but the type and amount of particles and chemicals in smoke varies depending on what is burning, how much oxygen is available, and the burn temperature.

Inhaling smoke for a short time can cause immediate incapacitating effects. Smoke is irritating to the eyes, nose, and throat, and its odor may be nauseating. Studies have shown that some people exposed to heavy smoke have temporary changes in lung function, which makes breathing more difficult. Two of the major agents in smoke that can cause health effects are carbon monoxide gas and very small particles. These particles are two and one half (2.5) microns or less in size and individual particles are too small to be seen with the naked eye.

Smoke is an extremely dangerous incapacitating substance, and with the droughts becoming more prevalent all across the globe, wildfires continue to be an immensely menacing threat to civilization.