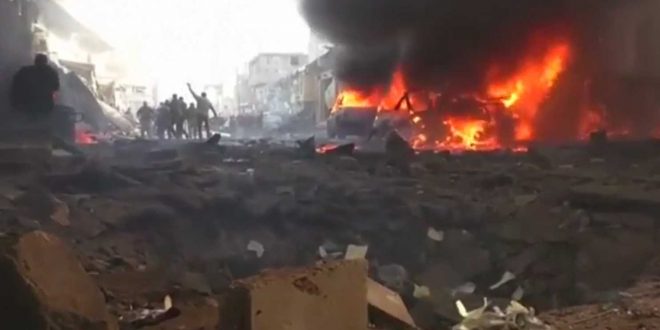 A fuel truck bomb in a northern Syrian market killed at least 46 on April 28th, including Syrian rebel fighters backed by Turkey, according to US officials.

The blast occurred in Afrin, a city controlled by Turkish proxies, just as people were out shopping in preparation for a break in Ramadan fasting, according to the State Department, which condemned the attack as cowardly and evil.

The explosion killed a total of 40 civilians, six Syrian-opposition fighters, and injured 50 other civilians. The Syria Civil Defense, or “White Helmets”, a volunteer organization in opposition-controlled Syria and Turkey, called the attack a “horrific massacre” of citizens.

The governor of the neighboring Turkish province of Hatay says the fuel tanker explosion was caused by a hand grenade, and the Turkish defense ministry blamed the YPG, or People’s Protection Units, a primarily-Kurdish militia.

“The enemy of humanity PKK/YPG has once again targeted innocent civilians in Afrin,” the Turkish defense ministry said in a Twitter post.

In 2018, the Turkish government launched a joint operation with Syrian-opposition forces to drive the YPG out of the city and the surrounding region. Turkey also claims that the YPG is an extension of the Kurdistan Worker’s Party, (PKK), which is recognized as a terrorist organization by the US and EU. The YPG did not immediately respond to any allegations.

Even through a global pandemic, the Syrian conflict continues to rage and kill more people each day.

Previous Power of Pets
Next Introduction to Myocarditis