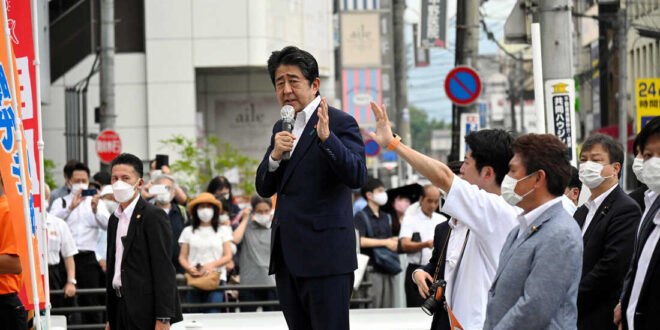 Former Japanese Prime Minister Shinzo Abe makes a speech before he was shot from behind by a man in Nara, western Japan July 8, 2022 in this photo taken by The Asahi Shimbun. The Asahi Shimbun/via REUTERS ATTENTION EDITORS - THIS IMAGE WAS PROVIDED BY A THIRD PARTY. NO RESALES. NO ARCHIVES. MANDATORY CREDIT. JAPAN OUT. NO COMMERCIAL OR EDITORIAL SALES IN JAPAN. NO RESALES. NO ARCHIVES.

Former Japanese Prime Minister Shinzo Abe was shot twice on Friday morning, while giving a speech on a street in Nara, Japan.

Security officials at the scene tackled the gunman and the 41-year old gunman is now in police custody.

The suspect, named Tetsuya Yamagami, admitted to shooting Abe with a homemade gun, and said that he held a grudge against a “specific organization”, according to police.

Several other handmade weapons, similar to the homemade gun used in the attack, along with explosives, were also found in a search of the suspect’s house.

Police are investigating why Abe was targeted out of other people related to the group that the suspect had a grudge against.

When asked by Japanese media if the gunman’s intention was to kill Abe, police say that Mr. Yamagami only admitted to shooting him.

Prime Minister Fumio Kishida, speaking before Abe’s death was confirmed, condemned the attack, saying: “It is barbaric and malicious and it cannot be tolerated. This attack was an act of brutality that happened during the elections – the very foundation of our democracy – and is absolutely unforgivable.”

Abe suffered two bullet wounds to his neck, and also damage to his heart. He was reportedly conscious and responsive in the minutes following, but his condition deteriorated rapidly.

The gunman made no attempt to run as security dived onto him. Reports say that he is a former member of Japan’s Maritime Self-Defense Force, and left active service in 2005.

Abe’s speech was part of a campaign for his former party, the Liberal Democratic Party, as upper house elections in Japan are set to take place later this week.

Ministers across the country were told to return to Tokyo immediately following the assassination.

Countries such as the U.S. and India have expressed their condolences to Japan, and pay respects to Abe by flying their flags at half-staff.