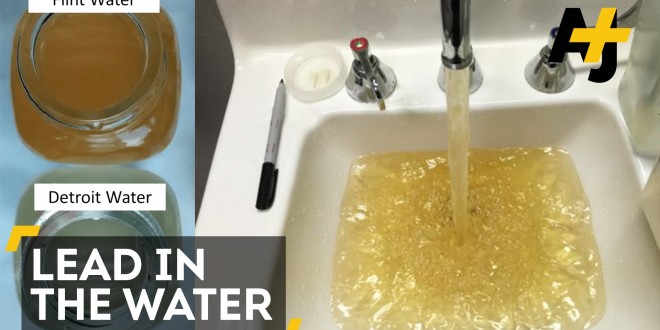 Flint, Michigan has been experiencing a water crisis since April 2014. Many parents and families have complained about the yellow-brown color of the water and a strange smell/taste, but officials downplayed the concerns for a long time. Finally, in 2016, action is being taken.

Previously, Flint’s water source was Lake Huron which they purchased from Detroit. This water was treated with orthophosphate that prevented the water from corroding the lead pipes and therefore prevented lead from these pipes leaking into the water. In 2014, Flint changed its water source to the Flint River. Flint River water was not treated with orthophosphate and in addition the water contains eight times more chloride. The chloride makes the water even more corrosive to the metal pipes and allows lead from the pipes to enter the water supply. Even though the city switched back in 2015, too much damage had been done, and the water is still deemed unsafe to drink.

The residents in Flint have been drinking and bathing in this water for over a year. Infants and young children are the most susceptible to lead poisoning and drinking water contaminated with lead can lead to many developmental problems. Almost 9,000 children live in Flint and every child has been exposed to the water. Even though the water is unsafe to use, residents are still being billed for the water. Many residents are already living in poverty – the average income is $25,000.

Cindy is senior at Henry M. Gunn High School and is incredibly honored to be a part of the Rising Star Magazine team. She enjoys belting out Disney songs, playing piano, watching Chinese dramas, and babysitting. Cindy serves as California DECA's VP of Silicon Valley and is also the singing teacher at FCSN and the President of HEARTS Nonprofit. She can be contacted at cindy@risingstarmagazine.com
Previous Attractiveness Explained
Next Am I White or Chinese? An Exploration into Identity and Culture