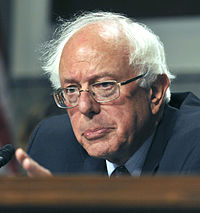 Bernie Sanders is the perfect democratic candidate for the upcoming 2016 election. He appeals to millennials, the largest voting portion of the population, and supports policies and plans that most appeal to the majority of people, such as free health care. He is the only democratic candidate not supported by a super PAC, and, unlike people like Hillary Clinton, seems very genuine, and a genuinely nice person. The recent Iowa caucus shows that he has the potential to win the democratic nomination; he was extremely close in the polls to Hillary, an impressive showing considering many believed he would not be even close. As Hillary Clinton is seen as more and more untrustworthy, Sanders, previously seen as the underdog, seems to have a genuine chance to win the election. Thus, I believe, and hope, that Sanders wins the upcoming election; if he does not, and Clinton wins, Obama will have been the only President since Reagan to not be a member of the Bush or Clinton family. The US needs change, and Bernie Sanders, hopefully, will be the one to deliver this change.